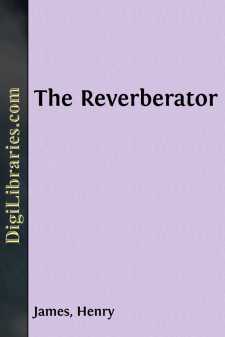 "I guess my daughter's in here," the old man said leading the way into the little salon de lecture. He was not of the most advanced age, but that is the way George Flack considered him, and indeed he looked older than he was. George Flack had found him sitting in the court of the hotel—he sat a great deal in the court of the hotel—and had gone up to him with characteristic directness and asked him for Miss Francina. Poor Mr. Dosson had with the greatest docility disposed himself to wait on the young man: he had as a matter of course risen and made his way across the court to announce to his child that she had a visitor. He looked submissive, almost servile, as he preceded the visitor, thrusting his head forward in his quest; but it was not in Mr. Flack's line to notice that sort of thing. He accepted the old gentleman's good offices as he would have accepted those of a waiter, conveying no hint of an attention paid also to himself. An observer of these two persons would have assured himself that the degree to which Mr. Dosson thought it natural any one should want to see his daughter was only equalled by the degree to which the young man thought it natural her father should take trouble to produce her. There was a superfluous drapery in the doorway of the salon de lecture, which Mr. Dosson pushed aside while George Flack stepped in after him.

The reading-room of the Hotel de l'Univers et de Cheltenham was none too ample, and had seemed to Mr. Dosson from the first to consist principally of a highly-polished floor on the bareness of which it was easy for a relaxed elderly American to slip. It was composed further, to his perception, of a table with a green velvet cloth, of a fireplace with a great deal of fringe and no fire, of a window with a great deal of curtain and no light, and of the Figaro, which he couldn't read, and the New York Herald, which he had already read. A single person was just now in possession of these conveniences—a young lady who sat with her back to the window, looking straight before her into the conventional room. She was dressed as for the street; her empty hands rested upon the arms of her chair—she had withdrawn her long gloves, which were lying in her lap—and she seemed to be doing nothing as hard as she could. Her face was so much in shadow as to be barely distinguishable; nevertheless the young man had a disappointed cry as soon as he saw her. "Why, it ain't Miss Francie—it's Miss Delia!"

"Well, I guess we can fix that," said Mr. Dosson, wandering further into the room and drawing his feet over the floor without lifting them. Whatever he did he ever seemed to wander: he had an impermanent transitory air, an aspect of weary yet patient non-arrival, even when he sat, as he was capable of sitting for hours, in the court of the inn. As he glanced down at the two newspapers in their desert of green velvet he raised a hopeless uninterested glass to his eye. "Delia dear, where's your little sister?"

Delia made no movement whatever, nor did any expression, so far as could be perceived, pass over her large young face....