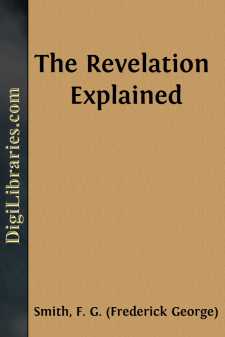 Before proceeding with the interpretation of this wonderful book, it will be necessary for us to pause and make inquiry concerning the nature of the language employed in its prophecies and concerning the mode of its interpretation. It will be seen at a glance that it is wholly unlike the common language of life; and it will be useless for us to undertake to ascertain its signification unless we understand perfectly the principles upon which it is founded.

The question may be asked, "Is the language intelligible at all?" Considering the variety of interpretations placed upon it by expositors and the opinions generally held respecting it, we might conclude that it is not. The majority of the people look upon these prophecies as "a mass of unintelligible enigmas," and are ready to tell the student of Revelation that this book "either finds or leaves a man mad." But are we to look upon its language as being applied at a venture, without any definite rule, capable of every variety of meaning, so that we can never be quite sure that we have its correct interpretation?

Commentators generally unite in attaching a definite meaning to certain symbols, and they tell us that these can not be applied otherwise without violating their nature. They may not give us their reasons for thus applying them (in fact, they generally do not), yet it is evidently assumed that such reasons do exist. Now, if reasons actually exist why a definite signification must be applied to the symbol in the one case, why do they not exist in another case, and in all cases? If any law exists in the case at all, it is a uniform one, for a law that does not possess uniformity is no law; otherwise, it would be an unintelligible revelation, and the only possible thing left for us to do would be to attempt to solve it like a riddle—guess it out. It would be as if the writer were to use words with every variety of meaning peculiarly his own attached, without informing the reader what signification to give them in a given instance. No man has a right thus to abuse written or spoken language; and we may take it for granted that the God of heaven would not make such an indiscriminate use of symbolical language when making a revelation to men. There is no other book the wide world around in which language is as carefully employed as in the Bible; and we can rest assured that when God gave this Revelation to Jesus Christ "to show unto his servants things which must shortly come to pass," he made choice of proper symbols whose meaning can be definitely evolved, provided we can but ascertain the great underlying principles upon which their original selection was based.

In the ordinary communication of our thoughts we employ arbitrary signs and sounds to which we have universally agreed to fix a definite meaning. Thus, our entire spoken language is made up of a great variety of sounds or words with which by long practise we have become familiar. We call a certain object a horse, not because there is any similarity between the sound and the animal designated, but because we have agreed that that sound shall represent that object....