The Religious Spirit of the Slavs (1916) Sermons On Subjects Suggested By The War, Third Series 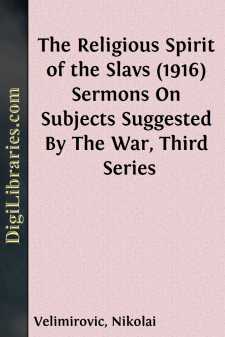 THE HOLY SYNOD AND TOLSTOI.

When Count Tolstoi was excommunicated by the Holy Synod of Russia because "he preached the teachings which are contrary to the Christian faith," the world was divided in opinion and sympathy into two parts. The partisans of Tolstoi were in the majority in the Western world; those of the Holy Synod in Russia and the Orthodox East. Yet Holy Russia rejected Tolstoi with much more compassion than Western Europe approved of him. It was a human tragedy which is not often repeated in history and was understood only by Russia. The conflict was more stern than appeared on the surface. The problems in question meant not less than the dilemma: either the Christian world was to continue or it must return to the starting point of human history and begin all anew. A little blade of grass in the field said to its green neighbours: "Why do we grow up? It is nonsense and pain. In growing up we grow in complications, which enhance the darkness and pain of our lives. I propose, therefore, to go back into seeds, from which we have grown big and unhappy."

So spoke one blade of grass to the field. And the field replied: "Although perhaps we are growing in nonsense and pain, still we cannot return, we must grow and go our way in the belief that we are not mistaken."

That is the simile of Tolstoi and the Holy Synod.

A CIRCLE OR A DRAMA.

Tolstoi perceived life as a circle, with the beginning everywhere and with the end everywhere. The Holy Synod, representing Slav Orthodoxy, perceived life as a drama with a beginning and an end in space and time. From his point of view, Tolstoi thought it possible for mankind to stop a mistaken course of things and to begin anew, to cast away all the burdens of culture, of State, Church, militarism, worldly ambitions, the vanities of towns, to draw the curtain on the past and to come back to the field and forest, to plough and sow, to listen to the life of Nature and to live with Nature and God in unison.

The Holy Synod, from their point of view, thought that the past is the very foundation of the present and future, and that in separating us from the past we were as an uprooted plant, condemned to inevitable death, while in continuing the world-drama we are going the only possible way. The beginning of sin in this drama is in Adam, the beginning of salvation is in Christ. We cannot live without taking notice even of the life of Adam and without connecting our life with Christ's. And all the other millions of human beings between those two milestones, between Adam and Christ, and Christ and us, are greater or smaller foundations, or conditions, or even disturbances of our own life.

"My understanding is against your traditions," said Tolstoi.

"Our traditions are against your understandings," replied the Holy Synod.

But that was not all.

The difference existed also in views on

Tolstoi was much troubled by the suffering of men. He himself saw, felt and described an immense amount of this suffering in various forms....