The Religions of India Handbooks on the History of Religions, Volume 1, Edited by Morris Jastrow 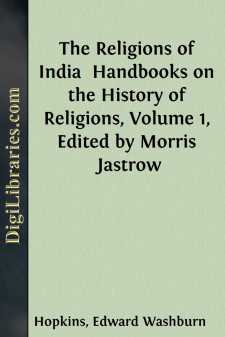 Add to My Favorites
Published: 9 years ago
Downloads: 147
Rating: (0 Votes)

India always has been a land of religions. In the earliest Vedic literature are found not only hymns in praise of the accepted gods, but also doubts in regard to the worth of these gods; the beginnings of a new religion incorporated into the earliest records of the old. And later, when, about 300 B.C, Megasthenes was in India, the descendants of those first theosophists are still discussing, albeit in more modern fashion, the questions that lie at the root of all religion. "Of the philosophers, those that are most estimable he terms Brahmans ([Greek: brachmanas]). These discuss with many words concerning death. For they regard death as being, for the wise, a birth into real life—into the happy life. And in many things they hold the same opinions with the Greeks: saying that the universe was begotten and will be destroyed, and that the world is a sphere, which the god who made and owns it pervades throughout; that there are different beginnings of all things, but water is the beginning of world-making, while, in addition to the four elements, there is, as fifth, a kind of nature, whence came the sky and the stars…. And concerning the seed of things and the soul they have much to say also, whereby they weave in myths, just as does Plato, in regard to the soul's immortality, judgment in hell, and such things."[1]

And as India conspicuously is a country of creeds, so is its literature preëminently priestly and religious. From the first Veda to the last Pur[=a]na, religion forms either the subject-matter of the most important works, or, as in the case of the epics,[2] the basis of didactic excursions and sectarian interpolations, which impart to worldly themes a tone peculiarly theological. History and oratory are unknown in Indian literature. The early poetry consists of hymns and religious poems; the early prose, of liturgies, linguistics, "law," theology, sacred legends and other works, all of which are intended to supplement the knowledge of the Veda, to explain ceremonies, or to inculcate religious principles. At a later date, formal grammar and systems of philosophy, fables and commentaries are added to the prose; epics, secular lyric, drama, the Pur[=a]nas and such writings to the poetry. But in all this great mass, till that time which Müller has called the Renaissance—that is to say, till after the Hindus were come into close contact with foreign nations, notably the Greek, from which has been borrowed, perhaps, the classical Hindu drama,[3]—there is no real literature that was not religious originally, or, at least, so apt for priestly use as to become chiefly moral and theosophic; while the most popular works of modern times are sectarian tracts, Pur[=]nas, Tantras and remodelled worldly poetry. The sources, then, from which is to be drawn the knowledge of Hindu religions are the best possible—the original texts. The information furnished by foreigners, from the times of Ktesias and Megasthenes to that of Mandelslo, is considerable; but one is warranted in assuming that what little in it is novel is inaccurate, since otherwise the information would have been furnished by the Hindus themselves; and that, conversely, an outsider's statements, although presumably correct, often may give an inexact impression through lack of completeness; as when—to take an example that one can control—Ktesias tells half the truth in regard to ordeals....