The Religion of Ancient Rome 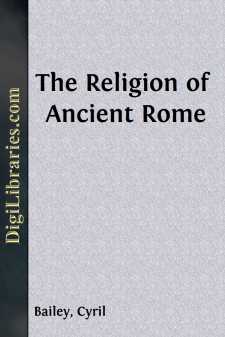 CHAPTER I INTRODUCTION—SOURCES AND SCOPE

The conditions of our knowledge of the native religion of early Rome may perhaps be best illustrated by a parallel from Roman archæology. The visitor to the Roman Forum at the present day, if he wishes to reconstruct in imagination the Forum of the early Republic, must not merely 'think away' many strata of later buildings, but, we are told, must picture to himself a totally different orientation of the whole: the upper layer of remains, which he sees before him, is for his purpose in most cases not merely useless, but positively misleading. In the same way, if we wish to form a picture of the genuine Roman religion, we cannot find it immediately in classical literature; we must banish from our minds all that is due to the contact with the East and Egypt, and even with the other races of Italy, and we must imagine, so to speak, a totally different mental orientation before the great influx of Greek literature and Greek thought, which gave an entirely new turn to Roman ideas in general, and in particular revolutionised religion by the introduction of anthropomorphic notions and sensuous representations. But in this difficult search we are not left without indications to guide us. In the writings of the savants of the late Republic and of the Empire, and in the Augustan poets, biassed though they are in their interpretations by Greek tendencies, there is embodied a great wealth of ancient custom and ritual, which becomes significant when we have once got the clue to its meaning. More direct evidence is afforded by a large body of inscriptions and monuments, and above all by the surviving Calendars of the Roman festival year, which give us the true outline of the ceremonial observances of the early religion.

It is not within the scope of this sketch to enter, except by way of occasional illustration, into the process of interpretation by which the patient work of scholars has disentangled the form and spirit of the native religion from the mass of foreign accretions. I intend rather to assume the process, and deal, as far as it is possible in so controversial a subject, with results upon which authorities are generally agreed. Neither will any attempt be made to follow the development which the early religion underwent in later periods, when foreign elements were added and foreign ideas altered and remoulded the old tradition. We must confine ourselves to a single epoch, in which the native Roman spirit worked out unaided the ideas inherited from half-civilised ancestors, and formed that body of belief and ritual, which was always, at least officially, the kernel of Roman religion, and constituted what the Romans themselves—staunch believers in their own traditional history—loved to describe as the 'Religion of Numa.' We must discover, as far as we can, how far its inherited notions ran parallel with those of other primitive religions, but more especially we must try to note what is characteristically Roman alike in custom and ritual and in the motives and spirit which prompted them.