The Relief of Mafeking How it Was Accomplished by Mahon's Flying Column; with an Account of Some Earlier Episodes in the Boer War of 1899-1900 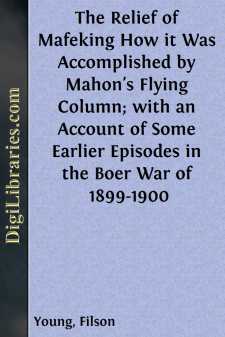 HOW THE RESERVES CAME UP

From a seat in the paymaster's office of the depôt barracks at Bury one afternoon in November, 1899, I could look either into the barrack yard or out along the Bolton Road. A four-wheeler clove its way through the crowd surrounding the gates, and the sentries presented arms to it. It contained my friend, the paymaster, who presently came upstairs carrying a bag in which were several hundred pounds sterling—the real sinews of war. This was the man whose business it was to call up the Reservists, and he had a very simple way of doing it. He had several books containing large forms divided by perforation into four parts. The first was a counterfoil on which was written the Reservist's name and the date of posting the order; the second was a railway warrant requesting the railway company to furnish him with a ticket available by the most direct route from his place of residence to the depôt; the third was the order requiring him to present himself at the barracks on or before a certain date; and the fourth was a money-order for three shillings, officially called an advance, but virtually a present from a considerate Government. On the 11th of the month the paymaster at Bury had signed about six hundred of these notices, and had seen them posted; on Sunday and Monday they had begun to fall like bombs on the breakfast tables of prosperous civilians all over the country; and soon the pieces of blue paper had made a sad disturbance in several hundreds of cottage homes, and added several hundred men to the strength of the 2nd Battalion of the Lancashire Fusiliers. The business of the pay office, or at least my friend's part of it—a few subalterns rushing up in a hurry to get money for their various companies; eighty pounds for A, a hundred pounds for D, and so on—was soon over, and then he told me something of how the Reserve system works.

All the men in the Reserve have put in at least seven years' service. They go into the Reserve first for a term of five years at sixpence a day, and then (if they wish) for a term of four years at fourpence a day. Of course when the Reserves are called out they receive the same pay as regular soldiers, and their wives have separation allowances. As everyone knows, this was the first time that any considerable number of the Reserves had been called up, and the system has worked admirably. About 98 per cent, in some districts presented themselves, the small remainder being either ill or in gaol. A small proportion of those who came up were rejected by the doctor, but on the whole the men were tough and fit. In this district they were allowed eight days in which to settle their affairs and present themselves at the depôt, but most of them did not come until the last minute, and several not until after the last minute of the time allowed by the order.

The crowd outside the barrack gates was composed chiefly of women and loafers, but every now and then it opened to admit a handful of reluctant-looking men, who had probably stayed outside until their money was exhausted....