The Relations of the Federal Government to Slavery Delivered at Fort Wayne, Ind., October 30th 1860 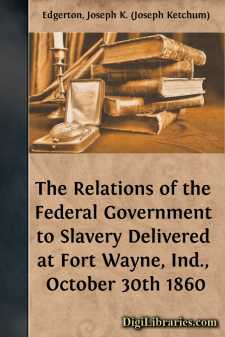 The publication at this time of a speech of the Presidential Canvass of 1860, may seem uncalled for, and be imputed to other than the motives that influence me. I nevertheless submit it to the candid consideration of the public, and especially of such as having heretofore entertained wrong views on the chief question involved in the canvass of 1860 and the position of the lamented Douglas, may desire truthful information. The speech at the time of its delivery was intended as a vindication of that noble-hearted, but then much-abused and misrepresented patriot. The grave of Douglas now shields him from the shafts of partisan animosity. Even his enemies concede, that in his last and self-sacrificing efforts to unite the Democracy of the North in support of an insulted government and outraged constitution, he earned the meed due to eminent patriotism. A perusal of the following pages may, perhaps, convince some, before doubting, that Douglas was as wise a statesman and as true a patriot in November, 1860, as he was in May, 1861, when the people of Chicago with one accord united in a grand ovation to do him honor, not as a partisan leader, but as a pillar and hope of the Republic in its day of mortal peril. If what I have written shall induce but even a few candid men to think better of the departed Douglas, as a statesman and patriot, than they were wont to think, I will be more than rewarded for my own labor in his vindication. But I have other motives than this.

The time is not far distant, and I would gladly accelerate its advance, when the conservative sentiment of the nation will revive and have utterance, and demand the re-enthronement of the spirit of compromise and peace—the guardian genius of the unity of the nation. Men of extreme and violent opinions, both North and South, whose fanaticism, folly and ambition have brought our great American Republic to its present sad estate, must give way before the incoming tide of a just public opinion on the relations of the Federal government to slavery. The people of the United States have neither the heart nor the means for a protracted warfare with each other in regard to negro slavery. The war is mainly the result of misunderstandings and erroneous opinions in both the slaveholding and non-slaveholding sections of the Union, which dispassionate investigation will remove. When the deluded men of the South shall come to understand by abundant evidence, which the good sense and patriotism of true Union men will furnish, that the spirit of the war on the part of the loyal States is one springing not from hatred to the Southern people and their institutions, but from earnest love of the Federal Union, and a determination to defend and re-establish it in all the integrity of its principles, they will gladly return to their first love and welcome the protection of the banner which has ever been the symbol of the power and glory of the United American people. If, however, the war on the part of professedly loyal men shall be guided by any other feeling than love for the Union and a sacred regard for all the obligations of its Constitution, the preservation of the Union will be impossible. The non-slaveholding States may, perhaps, bind the seceded States to them by the stern power of military subjugation, as Poland is bound to Russia, or Hungary to Austria, but the subjugation of one section of the Republic by another will never unite their people in the fraternal bonds of a true Federal Union.

The traditions and historic glory that surround the Federal Government as our fathers formed it, are yet dear to the hearts of the whole American people. That government still belongs to them—it is their heritage, and they, I trust, will yet restore and preserve it. The horoscope of the future daily brightens with hopeful signs, not the least of which is the fact that the President of the United States, who was elected to his high office upon a declaration of political principles logically involving the extermination of slavery as existing in fifteen States of the Federal Union, and which could not therefore be carried out without making the Union "a divided house," has himself become the supporter of a constitutional and conservative policy in regard to slavery. Let us thank God and take courage. If the government will but stand firmly on constitutional ground, we will not despair of the Republic.

It is also due to truth to say that one object I have in the present publication is to disabuse the minds of some of my fellow-citizens, whose good opinion I value, who have been misled by false statements charging me with sympathy with the Southern rebellion....