The Relation of Literature to Life 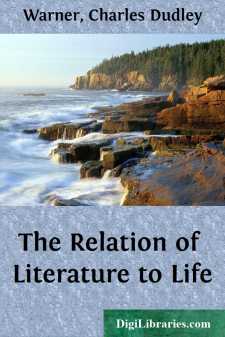 The county of Franklin in Northwestern Massachusetts, if not rivaling in certain ways the adjoining Berkshire, has still a romantic beauty of its own. In the former half of the nineteenth century its population was largely given up to the pursuit of agriculture, though not under altogether favorable conditions. Manufactures had not yet invaded the region either to add to its wealth or to defile its streams. The villages were small, the roads pretty generally wretched save in summer, and from many of the fields the most abundant crop that could be gathered was that of stones.

The character of the people conformed in many ways to that of the soil. The houses which lined the opposite sides of the single street, of which the petty places largely consisted, as well as the dwellings which dotted the country, were the homes of men who possessed in fullness many of the features, good and bad, that characterized the Puritan stock to which they belonged. There was a good deal of religion in these rural communities and occasionally some culture. Still, as a rule, it must be confessed, there would be found in them much more of plain living than of high thinking. Broad thinking could hardly be said to exist at all. By the dwellers in that region Easter had scarcely even been heard of; Christmas was tolerated after a fashion, but was nevertheless looked upon with a good deal of suspicion as a Popish invention. In the beliefs of these men several sins not mentioned in the decalogue took really, if unconsciously, precedence of those which chanced to be found in that list. Dancing was distinctly immoral; card-playing led directly to gambling with all its attendant evils; theatre-going characterized the conduct of the more disreputable denizens of great cities. Fiction was not absolutely forbidden; but the most lenient regarded it as a great waste of time, and the boy who desired its solace on any large scale was under the frequent necessity of seeking the seclusion of the haymow.

But however rigid and stern the beliefs of men might be, nature was there always charming, not only in her summer beauty, but even in her wildest winter moods. Narrow, too, as might be the views of the members of these communities about the conduct of life, there was ever before the minds of the best of them an ideal of devotion to duty, an earnest all-pervading moral purpose which implanted the feeling that neither personal success nor pleasure of any sort could ever afford even remotely compensation for the neglect of the least obligation which their situation imposed. It was no misfortune for any one, who was later to be transported to a broader horizon and more genial air, to have struck the roots of his being in a soil where men felt the full sense of moral responsibility for everything said or done, and where the conscience was almost as sensitive to the suggestion of sin as to its actual accomplishment.

It was amidst such surroundings that Charles Dudley Warner was born on the 12th of September, 1829....