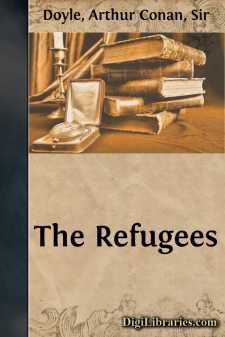 CHAPTER I. THE MAN FROM AMERICA.

It was the sort of window which was common in Paris about the end of the seventeenth century. It was high, mullioned, with a broad transom across the centre, and above the middle of the transom a tiny coat of arms—three caltrops gules upon a field argent—let into the diamond-paned glass. Outside there projected a stout iron rod, from which hung a gilded miniature of a bale of wool which swung and squeaked with every puff of wind. Beyond that again were the houses of the other side, high, narrow, and prim, slashed with diagonal wood-work in front, and topped with a bristle of sharp gables and corner turrets. Between were the cobble-stones of the Rue St. Martin and the clatter of innumerable feet.

Inside, the window was furnished with a broad bancal of brown stamped Spanish leather, where the family might recline and have an eye from behind the curtains on all that was going forward in the busy world beneath them. Two of them sat there now, a man and a woman, but their backs were turned to the spectacle, and their faces to the large and richly furnished room. From time to time they stole a glance at each other, and their eyes told that they needed no other sight to make them happy.

Nor was it to be wondered at, for they were a well-favoured pair. She was very young, twenty at the most, with a face which was pale, indeed, and yet of a brilliant pallor, which was so clear and fresh, and carried with it such a suggestion of purity and innocence, that one would not wish its maiden grace to be marred by an intrusion of colour. Her features were delicate and sweet, and her blue-black hair and long dark eyelashes formed a piquant contrast to her dreamy gray eyes and her ivory skin. In her whole expression there was something quiet and subdued, which was accentuated by her simple dress of black taffeta, and by the little jet brooch and bracelet which were her sole ornaments. Such was Adele Catinat, the only daughter of the famous Huguenot cloth-merchant.

But if her dress was sombre, it was atoned for by the magnificence of her companion. He was a man who might have been ten years her senior, with a keen soldier face, small well-marked features, a carefully trimmed black moustache, and a dark hazel eye which might harden to command a man, or soften to supplicate a woman, and be successful at either. His coat was of sky-blue, slashed across with silver braidings, and with broad silver shoulder-straps on either side. A vest of white calamanca peeped out from beneath it, and knee-breeches of the same disappeared into high polished boots with gilt spurs upon the heels. A silver-hilted rapier and a plumed cap lying upon a settle beside him completed a costume which was a badge of honour to the wearer, for any Frenchman would have recognised it as being that of an officer in the famous Blue Guard of Louis the Fourteenth. A trim, dashing soldier he looked, with his curling black hair and well-poised head. Such he had proved himself before now in the field, too, until the name of Amory de Catinat had become conspicuous among the thousands of the valiant lesser noblesse who had flocked into the service of the king....