"The Red Watch" With the First Canadian Division in Flanders 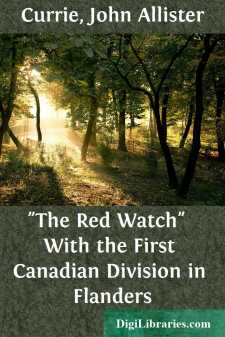 The kind reception given to the rough notes from the Author's Diary, which appeared first in the daily papers in Canada, encouraged the production of this book. These notes, in order to make them more readable, have been put in narrative form. There is no pretence that this is a history of the war. It is only a string of pen pictures describing life and incidents of the campaign common to almost every corps in the field.

Where anything is omitted it must be borne in mind that the author cannot give any information of a military character which might assist the enemy while the war is in progress.

Opinions and observations on military matters are omitted. Discussions on the merits of the various arms, equipments, rifles, work of the staff, errors, omissions and criticisms of the manner in which the war is conducted, must wait for a future volume.

It is hoped that this publication will encourage all young men to "take their places in the ranks" and bear arms for the King and Empire, regardless of whether our military system be volunteering, conscription or National service.

It is more evident every day that there is need for the mobilization and consolidation of all the resources of the Empire. Consolidated and mobilized the Empire is self-sustaining and invincible. Its military and financial powers would be quadrupled. There is nothing to justify any delay in accomplishing this object except political expediency. In union there would be not only immediate strength, but confidence and harmony.

The world is just as full of brave deeds and stirring events as ever. The British Empire is yet a lump of clay unfashioned and formless on the wheel of the potter. That is the colonial view. It is for us to help "Mould it nearer to our heart's desire."

It is a great privilege to live in this age when such glorious deeds are being performed and history is being written. It is better still to be permitted to die, doing brave deeds, that our Empire may live, greater, freer and happier than ever.

CHAPTER I KILTIES IN CANADA.

With this book as with many others the first chapter should be read last. The reason it is placed first is that the chronological order must be maintained. Besides, when stirring deeds by brave men are recalled, it matters not how briefly, they demand better treatment than being embalmed in an appendix.

This chapter deals with the first appearance of the Highland soldier in Canada. That appearance was both interesting and tragic. The stories and legends surrounding the campaigns of these brave men have furnished many themes for the poet and novelist. This chapter can only briefly refer to them.

If you search the great plains and rugged mountains of Canada from end to end, you will find many beautiful plants and flowers, but not a single spray of heather. Only in one spot in the whole vast Dominion will you find the plant that is so characteristically Scottish, growing naturally, and that is in Point Pleasant Park, Halifax....