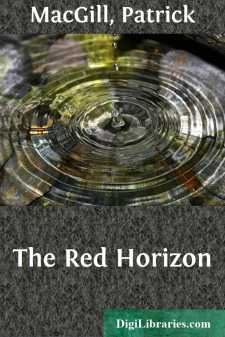 RED HORIZON CHAPTER 1 The Passing of the Regiment

I wish the sea were not so wideThat parts me from my love;I wish the things men do belowWere known to God above.

I wish that I were back againIn the glens of Donegal;They'll call me coward if I return,But a hero if I fall.

"Is it better to be a living coward,Or thrice a hero dead?""It's better to go to sleep, my lad,"The Colour Sergeant said.

Night, a grey troubled sky without moon or stars. The shadows lay on the surface of the sea, and the waves moaned beneath the keel of the troopship that was bearing us away on the most momentous journey of our lives. The hour was about ten. Southampton lay astern; by dawn we should be in France, and a day nearer the war for which we had trained so long in the cathedral city of St. Albans.

I had never realized my mission as a rifleman so acutely before.

"To the war! to the war!" I said under my breath. "Out to France and the fighting!" The thought raised a certain expectancy in my mind. "Did I think three years ago that I should ever be a soldier?" I asked myself. "Now that I am, can I kill a man; run a bayonet through his body; right through, so that the point, blood red and cruelly keen, comes out at the back? I'll not think of it."

But the thoughts could not be chased away. The month was March, and the night was bitterly cold on deck. A sharp penetrating wind swept across the sea and sung eerily about the dun-coloured funnel. With my overcoat buttoned well up about my neck and my Balaclava helmet pulled down over my ears I paced along the deck for quite an hour; then, shivering with cold, I made my way down to the cabin where my mates had taken up their quarters. The cabin was low-roofed and lit with two electric lamps. The corners receded into darkness where the shadows clustered thickly. The floor was covered with sawdust, packs and haversacks hung from pegs in the walls; a gun-rack stood in the centre of the apartment; butts down and muzzles in line, the rifles stretched in a straight row from stern to cabin stairs. On the benches along the sides the men took their seats, each man under his equipment, and by right of equipment holding the place for the length of the voyage.

My mates were smoking, and the whole place was dim with tobacco smoke. In the thick haze a man three yards away was invisible.

"Yes," said a red-haired sergeant, with a thick blunt nose, and a broken row of tobacco-stained teeth; "we're off for the doin's now."

"Blurry near time too," said a Cockney named Spud Higgles. "I thought we weren't goin' out at all."

"What d'ye mean?" inquired the sergeant.

"Ye're always speakin' about that bruvver of yours," said Spud. "'E's only in Ally Sloper's Cavalry; no man's ever killed in that mob."

"H'm!" snorted the sergeant. "The A.S.C. runs twice as much risk as a line regiment."

"That's why ye didn't join it then, is it?" asked the Cockney.

"Hold your tongue," snapped the sergeant, and Spud relapsed into silence.

After a moment he turned to me where I sat. "It's not only Germans that I'll look for in the trenches," he said, "when I have my rifle loaded and get close to that sergeant——"

"You'll put a bullet through him"; I said, "just as you vowed you'd do to me some time ago. You were going to put a bullet through the sergeant-major, the company cook, the sanitary inspector, the army tailor and every single man in the regiment. Are you going to destroy the London Irish root and branch?" I asked.

"Well, there's some in it as wants a talking to at times," said Spud. "'Ave yer got a fag to spare?"

Somebody sung a ragtime song, and the cabin took up the chorus....