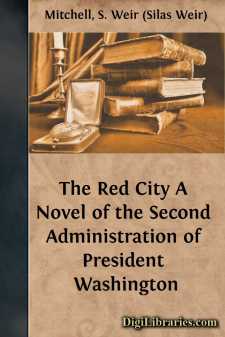 THE RED CITY A NOVEL OF THE SECOND ADMINISTRATION OF WASHINGTON I.

About five in the afternoon on the 23d of May, 1792, the brig Morning Star of Bristol, John Maynard, master, with a topgallant breeze after her, ran into Delaware Bay in mid-channel between Cape May and Cape Henlopen. Here was the only sunshine they had seen in three weeks. The captain, liking the warmth on his broad back, glanced up approvingly at mast and rigging. "She's a good one," he said, and noting the ship powdered white with her salt record of the sea's attentions, he lighted a pipe and said aloud, "She's salted like Christmas pork." As he spoke, he cast an approving eye on a young fellow who sat at ease in the lower rigging, laughing as the brig rolled over and a deluge of water flushed the deck and made the skipper on the after-hatch lift his feet out of the way of the wash.

"Hi, there, Wicount," called the captain, "she's enjoying of herself like a young duck in a pond."

De Courval called out a gay reply, lost, as the ship rolled, in the rattle of storm-loosened stays and the clatter of flapping sails.

Toward sunset the wind lessened, the sea-born billows fell away, and De Courval dropped lightly on the deck, and, passing the master, went down to the cabin.

Near to dusk of this pleasant evening of May the captain anchored off Lewes, ordered a boat sent ashore, and a nip of rum all round for the crew. Then, with a glass for himself, he lighted his pipe and sat down on the cover of the companionway and drew the long breath of the victor in a six-weeks' fight with the Atlantic in its most vicious mood. For an hour he sat still, a well-contented man; then, aware of a curly head and bronzed young face rising out of the companionway beside him, he said, "You might find that coil of rope comfortable."

The young man, smiling as he sat down, accepted the offer of the captain's tobacco and said in easy English, with scarce a trace of accent to betray his French origin: "My mother thanks you, sir, for your constant care of her. I have no need to repeat my own thanks. We unhappy émigrés who have worn out the hospitality of England, and no wonder, find kindness such as yours as pleasant as it is rare. My mother fully realizes what you have given us amid all your cares for the ship—and—"

"Oh, that's all right, Wicount," broke in the captain. "My time for needing help and a cheery word may come any day on land or sea. Some one will pay what seems to you a debt."

"Ah, well, here or hereafter," said the young man, gravely, and putting out a hand, he wrung the broad, hairy paw of the sailor. "My mother will come on deck to-morrow and speak for herself. Now she must rest. Is that our boat?"

"Yes; I sent it ashore a while ago. There will be milk and eggs and fresh vegetables for madam."

"Thank you," said De Courval. A slight, full feeling in the throat, a little difficulty in controlling his features, betrayed the long strain of much recent peril and a sense of practical kindness the more grateful for memories of bitter days in England and of far-away tragic days in France....