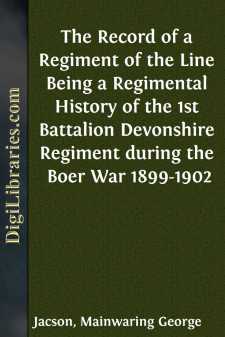 CHAPTER I EVENTS LEADING UP TO THE SIEGE OF LADYSMITH 1899

On returning from the North-West Frontier of India at the close of the Tirah Expedition, 1897-8, the 1st Battalion Devonshire Regiment, which had served with distinction under the command of Colonel J.H. Yule in the campaign against the Afridi clans, was ordered to proceed from Peshawar to Jullunder, at which place it was quartered in 1898 and in the summer months of 1899, during which time certain companies and detachments were furnished for duty at Dalhousie, Kasauli, and Ghora Dakka (Murree Hills), and located during the hot weather at these places.

Towards the latter end of August, 1899, news from South Africa appeared ominous, and war seemed likely to break out between England and the Transvaal.

On the 8th September, 1899, confidential instructions were received from army head-quarters at Simla ordering the Regiment to get ready to move at short notice to South Africa, and a few days later further orders were received to entrain on the 16th September for Bombay en route to the Transvaal, which country the Regiment was destined not to reach for some months, and then only after severe fighting.

The companies quartered at Dalhousie and Ghora Dakka with difficulty joined the head-quarters at Jullunder before the 16th, and the following marches are worthy of record:—

The Dalhousie detachment marched to Pathankote, a distance of 54-1/4 miles, in two days. Major Curry, who was in command, gave each man a coolie for his baggage, and ordered the men to get to Duneera the first day the best way they could. At Duneera they halted for the night, and the next day pushed on in the same manner to Pathankote, where they immediately entrained and proceeded to Jullunder.

The Ghora Dakka detachment under Lieutenant Emerson marched to Rawal Pindi, a distance of fifty-four miles, in two days, and then entrained for Jullunder.

No men fell out in either party, and considering the time of year and the intense heat, they were fine performances.

Some officers were on leave in Cashmere, and only arrived at Jullunder as the Regiment was entraining.

On September 16th, 1899, the 1st Battalion Devonshire Regiment, under the command of Major C.W. Park, left Jullunder by rail for Bombay with a strength as under:—

The following officers accompanied the battalion:—

The following officers were attached for duty to the battalion:—