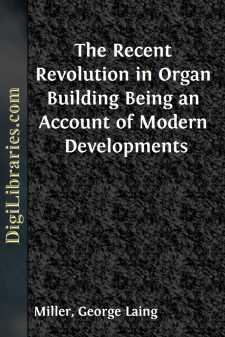 CHAPTER I. AS IT WAS IN THE BEGINNING.

The origin of the pipe organ is lost in the mists of antiquity. Tradition hath it that there was one in Solomon's Temple at Jerusalem, the sound of which could be heard at the Mount of Olives. It has the honor of being the first wind instrument mentioned in the Bible (Genesis iv, 21), where we are told that "Jubal is the father of all such as handle the harp and the organ." The Hebrew word here is ugab, which is sometimes translated in the Septuagint by cithara (the ancient lute), sometimes by psalm, sometimes by organ. Sir John Stainer ("Dictionary of Musical Terms," p. 444) says: "It is probable that in its earliest form the ugab was nothing more than a Pan's-pipes or syrinx, but that it gradually developed into a more important instrument." The passage, however, shows that the ugab was known in the time of Moses, who was "learned in all the learning of the Egyptians."

The flute, a component part of the organ, is one of the most ancient of musical instruments. We find it pictured on the walls of early Egyptian tombs, and specimens of it, still in playable condition, have been unearthed and can be seen in our museums. Some of them were double, as shown in the illustration. Side by side with these flutes we find the shepherd's pipe with a reed or strip of cane in the mouthpiece, which may be found in the Tyrol at the present day. The next step was probably the bagpipes. Here we find four of these pipes attached to a bag. The melody or tune is played on one of the pipes furnished with holes for the purpose, while the other three give a drone, bass. The bag, being blown up, forms a wind reservoir and the amount of tone can be regulated by the pressure of the arm. Here we have the precursor of the organ bellows. Next comes the Irish bagpipes, with a bellows worked by the arm furnishing the wind to the bag, the reservoir, and producing a much sweeter tone. This is one line of advance.

On the other hand we have the syrinx or Pan's-pipes. Stainer says this was undoubtedly the precursor of the organ. "It was formed of seven, eight or nine short hollow reeds, fixed together by wax, and cut in graduated lengths so as to produce a musical scale. The lower ends of the reeds were closed and the upper open and on a level, so that the mouth could easily pass from one pipe to another." This is the instrument used at the present day by the Punch and Judy man....