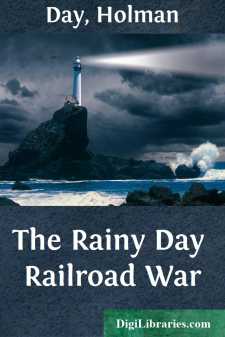 All at once the stump-dotted, rocky hillside became clamorous and animated. From the little shacks sheathed with tarred paper, from the sodded huts, from burrows sunk into the hillside men suddenly came popping out with shrill cries.

Three men, shouldering surveying instruments, stopped in their tracks on the freshly-heaped soil of a new railroad embankment, and gazed up at the hillside. The railroad skirted its foot and the sudden activity on the slope was in full view. "Your lambs seem to be blatting around the fodder-rack once more, Parker," observed the man who lugged the transit. He was a thin, elderly man and his tone was somewhat satirical.

The men were running toward a common center, uttering cries in shrill staccato and sounding like yelping dogs.

Parker drove the spurs of his tripod into the soft soil and stared up at the hillside, his tanned brow puckering with apprehension.

"I don't think there's much of the lamb to that rush," observed the third man; "they sound to me more like hyenas after raw meat."

"It will be Dominick they'll eat, then," said the elderly man.

"I'm afraid you put the Old Harry into 'em last week when you took their part and straightened out Dominick's bill of fare," he went on. "They probably think they can get quail on toast now if they yap for it."

"I believe in letting dagoes fight it out among themselves," announced the third man with much derision. "Helping one of 'em is like picking a hornet out of a puddle. You'll get stung while doing it."

The men on the hillside had knotted themselves into a jostling group before the door of a long, low structure sheathed with tarred paper like the shacks. In the sunshine an occasional glint flashed above their heads.

"Yes, their stingers are out," remarked the elderly man drily. "If they've got Dominick cornered in that eating camp I'm thinking this will be the day that he'll get his——whatever it is, they've laid up for him."

"He promised me there should be no more weevils and no more spoiled meat," cried the one who had been addressed as Parker, a young man whose earnest face now expressed deep trouble. "As matters were going, those Italians were half starved and doing hardly half a day's work in nine hours. Their padrone was putting the food rake-off into his own pocket."

"I'm not backing up Dominick," said the other. "But when you took the men's part and laid down the law to him on the grub question you gave them their cue for general rebellion. Ten chances to one the padrone has done as he agreed. I reckon you scared him enough for that. Now they're probably around with knives looking for napkins and sparkling red wine. I tell you, Parker, you're inviting trouble when you go to boosting up what you call the oppressed multitude."

"That's a pretty hard view to take of the world and the people in it, Mr. Searles," replied the youth. "There ought to be a bit of merit and encouragement in a man's going out of his way to right a wrong."

"Well, Parker, I'm hired as construction engineer on the P....