The Radio Boys Trailing a Voice or, Solving a Wireless Mystery 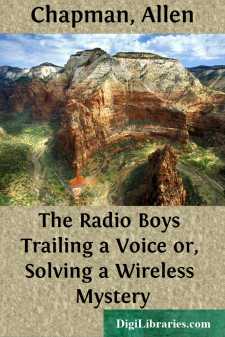 “You fellows want to be sure to come round to my house to-night and listen in on the radio concert,” said Bob Layton to a group of his chums, as they were walking along the main street of Clintonia one day in the early spring.

“I’ll be there with bells on,” replied Joe Atwood, as he kicked a piece of ice from his path. “Trust me not to overlook anything when it comes to radio. I’m getting to be more and more of a fan with every day that passes. Mother insists that I talk of it in my sleep, but I guess she’s only fooling.”

“Count on yours truly too,” chimed in Herb Fennington. “I got stirred up about radio a little later than the rest of you fellows, but now I’m making up for lost time. Slow but sure is my motto.”

“Slow is right,” chaffed Jimmy Plummer. “But what on earth are you sure of?”

“I’m sure,” replied Herb, as he deftly slipped a bit of ice down Jimmy’s back, “that in a minute you’ll be dancing about like a howling dervish.”

His prophecy was correct, for Jimmy both howled and danced as he tried vainly to extricate the icy fragment that was sliding down his spine. His contortions were so ludicrous that the boys broke into roars of laughter.

“Great joke, isn’t it?” snorted Jimmy, as he bent nearly double. “If you had a heart you’d lend a hand and get this out.”

“Let’s stand him on his head,” suggested Joe. “That’s the only thing I can think of. Then it’ll slide out.”

Hands were outstretched in ready compliance, but Jimmy concluded that the remedy was worse than the presence of the ice and managed to keep out of reach.

“Yes, and it’ll be a good thing for Jimmy to grin and bear it,” added Herb brightly. “It’s things like that that develop one’s character.”

“‘It’s easy enough to be pleasant, when life moves along like a song, but the man that’s worth while, is the man who can smile when everything’s going dead wrong,’” quoted Joe.

Jimmy, not at all comforted by these noble maxims, glared at his tormentors, and at last Bob came to his relief, and, putting his hand inside his collar, reached down his back and brought up the piece of ice, now greatly reduced in size.

“Let’s have it,” demanded Jimmy, as Bob was about to throw it away.

“What do you want it for?” asked Bob. “I should think you’d seen enough of it.”

“On the same principle that a man likes to look at his aching tooth after the dentist has pulled it out,” grinned Joe.

“Don’t give it to him!” exclaimed Herb, edging away out of reach, justly fearing that he might feel the vengeance of the outraged Jimmy.

“You gave it to him first, so it’s his,” decided Bob, with the wisdom of a Solomon, as he handed it over to the victim.

Jimmy took it and started for Herb, but just then Mr. Preston, the principal of the high school, came along and Jimmy felt compelled to defer his revenge....