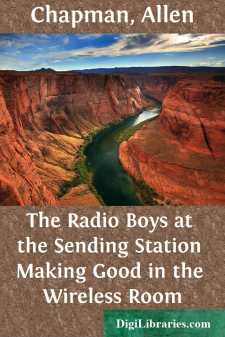 “Isn’t it a grand and glorious feeling?” exclaimed Bob Layton, a tall stalwart lad of fifteen, as he stretched himself out luxuriously on the warm sands of the beach at Ocean Point and pulled his cap a little further over his eyes to keep out the rays of the sun.

“I’ll tell the world it is,” agreed Joe Atwood, his special chum, as he burrowed lazily into the hollow he had scooped out for himself. “You don’t have to put up any argument to prove it, Bob. I admit it from the start.”

“Same here,” chimed in Herb Fennington, sprawled out in a fashion which if certainly inelegant was quite as certainly comfortable. “Take it from me, it’s great. I could die loafing like this.”

“Seems to be unanimous,” remarked Bob, “although I haven’t heard Jimmy’s musical voice mixing into the conversation and he’s usually right there with the talk. I wonder——”

Just then he was interrupted by a vigorous snore proceeding from a fourth member of the group, a fat round-faced boy slightly younger than the others, who was lying on his back a few feet away.

The boys broke into a laugh.

“There’s the answer,” chuckled Herb. “Trust Jimmy to go to sleep on the slightest provocation. There’s only one thing he can do better, and that is eating.”

“He sure is no slouch at either,” laughed Joe. “The seven sleepers of Ephesus had nothing on Jimmy. And if he went into a doughnut-eating contest, I’d back him to my last dime.”

“It’s no wonder that’s he’s tired,” said Bob, coming to the defense of the unconscious Jimmy. “If either of you fellows had had the tussle he had with the waves that night when he was hanging on to the broken bridge expecting every minute to be his last, you wouldn’t be feeling any too lively, you can bet your boots.”

“Right you are,” admitted Herb. “That was a tough fight. It makes the cold chills run up and down my back now when I think of it. I don’t think there’ll be many times in Jimmy’s life when he’ll come so near death and yet side-step it.”

“You were pretty close to it yourself, Bob,” put in Joe. “Your chances of getting by didn’t seem to be worth a plugged nickel. Of course you’re stronger than Jimmy and could have kept up longer if you’d been swept away, but I don’t believe there’s any one living that could have bucked that torrent.”

“I’ll admit that I felt mighty good when I got my feet on solid ground again,” said Bob. “There’s no denying that that was a pretty strenuous night, what with fighting the waves and Dan Cassey too. But we beat them both and came through all right.”

“Talking of Cassey,” said Joe, “I saw the rascal this morning when I went into the town to attend to a little business for my father. I wasn’t far from the jail and I dropped in to see just what arrangements had been made for his trial. The warden was glad to see me—you know he’s been pretty strong for us since we saved the police the work of getting their claws on Cassey—and as he was just about to make the rounds he asked me to go along....