The Queen of the Pirate Isle 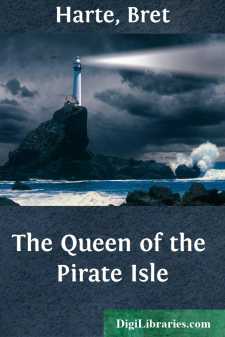 I first knew her as the Queen of the Pirate Isle. To the best of my recollection she had no reasonable right to that title. She was only nine years old, inclined to plumpness and good humor, deprecated violence, and had never been to sea. Need it be added that she did NOT live in an island and that her name was Polly?

Perhaps I ought to explain that she had already known other experiences of a purely imaginative character. Part of her existence had been passed as a Beggar Child,—solely indicated by a shawl tightly folded round her shoulders, and chills; as a Schoolmistress, unnecessarily severe; as a Preacher, singularly personal in his remarks, and once, after reading one of Cooper's novels, as an Indian Maiden. This was, I believe, the only instance when she had borrowed from another's fiction. Most of the characters that she assumed for days and sometimes weeks at a time were purely original in conception; some so much so as to be vague to the general understanding. I remember that her personation of a certain Mrs. Smith, whose individuality was supposed to be sufficiently represented by a sunbonnet worn wrong side before and a weekly addition to her family, was never perfectly appreciated by her own circle although she lived the character for a month. Another creation known as "The Proud Lady"—a being whose excessive and unreasonable haughtiness was so pronounced as to give her features the expression of extreme nausea—caused her mother so much alarm that it had to be abandoned. This was easily effected. The Proud Lady was understood to have died. Indeed, most of Polly's impersonations were got rid of in this way, although it by no means prevented their subsequent reappearance. "I thought Mrs. Smith was dead," remonstrated her mother at the posthumous appearance of that lady with a new infant. "She was buried alive and kem to!" said Polly with a melancholy air. Fortunately, the representation of a resuscitated person required such extraordinary acting, and was, through some uncertainty of conception, so closely allied in facial expression to the Proud Lady, that Mrs. Smith was resuscitated only for a day.

The origin of the title of the Queen of the Pirate Isle may be briefly stated as follows:—

An hour after luncheon, one day, Polly, Hickory Hunt, her cousin, and Wan Lee, a Chinese page, were crossing the nursery floor in a Chinese junk. The sea was calm and the sky cloudless. Any change in the weather was as unexpected as it is in books. Suddenly a West Indian Hurricane, purely local in character and unfelt anywhere else, struck Master Hickory and threw him overboard, whence, wildly swimming for his life and carrying Polly on his back, he eventually reached a Desert Island in the closet. Here the rescued party put up a tent made of a table-cloth providentially snatched from the raging billows, and, from two o'clock until four, passed six weeks on the island, supported only by a piece of candle, a box of matches, and two peppermint lozenges. It was at this time that it became necessary to account for Polly's existence among them, and this was only effected by an alarming sacrifice of their morality; Hickory and Wan Lee instantly became PIRATES, and at once elected Polly as their Queen. The royal duties, which seemed to be purely maternal, consisted in putting the Pirates to bed after a day of rapine and bloodshed, and in feeding them with licorice water through a quill in a small bottle....