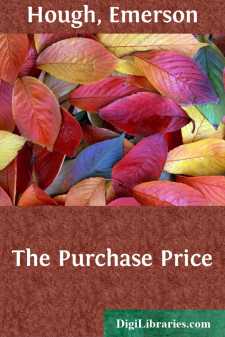 CHAPTER I A LADY IN COMPANY

"Madam, you are charming! You have not slept, and yet you smile.No man could ask a better prisoner."

She turned to him, smiling faintly.

"I thank you. At least we have had breakfast, and for such mercy I am grateful to my jailer. I admit I was famished. What now?"

With just the turn of a shoulder she indicated the water front, where, at the end of the dock on which they stood, lay the good ship, Mount Vernon, river packet, the black smoke already pouring from her stacks. In turn he smiled and also shrugged a shoulder.

"Let us not ask! My dear lady, I could journey on for ever with one so young and pleasant as yourself. I will give you my promise in exchange for your parole."

Now her gesture was more positive, her glance flashed more keenly at him. "Do not be too rash," she answered. "My parole runs only while we travel together privately. As soon as we reach coach or boat, matters will change. I reserve the right of any prisoner to secure life, liberty and the pursuit of happiness. I shall endeavor, believe me—and in my own way."

He frowned as she presently went on to make herself yet more clear. "It was well enough when we traveled in our own private express, from Washington here to Pittsburgh for then there was no chance for escape. I gave my parole, because it pleased you and did not jeopardize myself. Here my jailer may perhaps have some trouble with me."

"You speak with the courage and fervor of the true leader of a cause. Madam," he rejoined, now smiling. "What evil days are these on which I have fallen—I, a mere soldier obeying orders! Not that I have found the orders unpleasant; but it is not fair of you to bring against mankind double weapons! Such is not the usage of civilized warfare. Dangerous enough you are as woman alone, without bringing to your aid those gifts of mind suited to problems which men have been accustomed to arrogate to themselves."

"Arrogate is quite the right word. It is especially fit for a jailer."

This time the shaft went home. The florid countenance of young Captain Carlisle flushed yet ruddier beneath its tan. His lips set still more tightly under the scant reddish mustache. With a gesture of impatience he lifted his military hat and passed a hand over the auburn hair which flamed above his white forehead. His slim figure stiffened even as his face became more stern. Clad in the full regimentals of his rank, he made a not unmanly figure as he stood there, though hardly taller than this splendid woman whom he addressed—a woman somewhat reserved, mocking, enigmatic; but, as he had said, charming. That last word of description had been easy for any man who had seen her, with her long-lashed dark eyes, her clear cheek just touched with color, her heavy dark hair impossible to conceal even under its engulfing bonnet, her wholly exquisite and adequate figure equally unbanished even by the trying costume of the day. She stood erect, easy, young, strong, fit to live; and that nature had given her confidence in herself was evidenced now in the carriage of head and body as she walked to and fro, pausing to turn now and then, impatient, uneasy, like some caged creature, as lithe, as beautiful, as dangerous and as puzzling in the matter of future conduct....