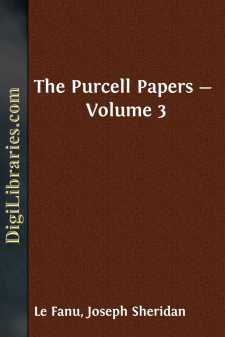 Jim Sulivan was a dacent, honest boy as you'd find in the seven parishes, an' he was a beautiful singer, an' an illegant dancer intirely, an' a mighty plisant boy in himself; but he had the divil's bad luck, for he married for love, an 'av coorse he niver had an asy minute afther.

Nell Gorman was the girl he fancied, an' a beautiful slip of a girl she was, jist twinty to the minute when he married her. She was as round an' as complate in all her shapes as a firkin, you'd think, an' her two cheeks was as fat an' as red, it id open your heart to look at them.

But beauty is not the thing all through, an' as beautiful as she was she had the divil's tongue, an' the divil's timper, an' the divil's behaviour all out; an' it was impossible for him to be in the house with her for while you'd count tin without havin' an argymint, an' as sure as she riz an argymint with him she'd hit him a wipe iv a skillet or whatever lay next to her hand.

Well, this wasn't at all plasin' to Jim Sulivan you may be sure, an' there was scarce a week that his head wasn't plasthered up, or his back bint double, or his nose swelled as big as a pittaty, with the vilence iv her timper, an' his heart was scalded everlastin'ly with her tongue; so he had no pace or quietness in body or soul at all at all, with the way she was goin' an.

Well, your honour, one cowld snowin' evenin' he kim in afther his day's work regulatin' the men in the farm, an' he sat down very quite by the fire, for he had a scrimmidge with her in the mornin', an' all he wanted was an air iv the fire in pace; so divil a word he said but dhrew a stool an' sat down close to the fire. Well, as soon as the woman saw him,

Well, he kept never mindin', an' didn't let an' to hear a word she was sayin', so she kim over an' she had a spoon in her hand, an' she took jist the smallest taste in life iv the boilin' wather out iv the pot, an' she dhropped it down an his shins, an' with that he let a roar you'd think the roof id fly aff iv the house.

'Hould your tongue, you barbarrian,' says she; 'you'll waken the child,' says she.

'That's purty behavour,' says she; 'it's fine usage you're givin' me, isn't it?' says she, gettin' wickeder every minute; 'but before I'm boiled,' says she, 'thry how you like THAT,' says she; an', sure enough, before he had time to put up his guard, she hot him a rale terrible clink iv the iron spoon acrass the jaw.

'Will you?' says she, an' with that she hot him another tin times as good as the first.

'By jabers,' says he, slappin' himself behind, 'that's the last salute you'll ever give me,' says he; 'so take my last blessin',' says he, 'you ungovernable baste!' says he—an' with that he pulled an his hat an' walked out iv the door.

Well, she never minded a word he said, for he used to say the same thing all as one every time she dhrew blood; an' she had no expectation at all but he'd come back by the time supper id be ready; but faix the story didn't go quite so simple this time, for while he was walkin', lonesome enough, down the borheen, with his heart almost broke with the pain, for his shins an' his jaw was mighty troublesome, av course, with the thratement he got, who did he see but Mick Hanlon, his uncle's sarvint by, ridin' down, quite an asy, an the ould black horse, with a halter as long as himself....