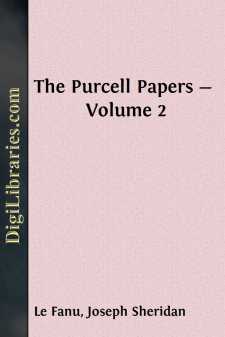 The following paper is written in a female hand, and was no doubt communicated to my much-regretted friend by the lady whose early history it serves to illustrate, the Countess D——. She is no more—she long since died, a childless and a widowed wife, and, as her letter sadly predicts, none survive to whom the publication of this narrative can prove 'injurious, or even painful.' Strange! two powerful and wealthy families, that in which she was born, and that into which she had married, have ceased to be—they are utterly extinct.

To those who know anything of the history of Irish families, as they were less than a century ago, the facts which immediately follow will at once suggest THE NAMES of the principal actors; and to others their publication would be useless—to us, possibly, if not probably, injurious. I have, therefore, altered such of the names as might, if stated, get us into difficulty; others, belonging to minor characters in the strange story, I have left untouched.

My dear friend,—You have asked me to furnish you with a detail of the strange events which marked my early history, and I have, without hesitation, applied myself to the task, knowing that, while I live, a kind consideration for my feelings will prevent your giving publicity to the statement; and conscious that, when I am no more, there will not survive one to whom the narrative can prove injurious, or even painful.

My mother died when I was quite an infant, and of her I have no recollection, even the faintest. By her death, my education and habits were left solely to the guidance of my surviving parent; and, as far as a stern attention to my religious instruction, and an active anxiety evinced by his procuring for me the best masters to perfect me in those accomplishments which my station and wealth might seem to require, could avail, he amply discharged the task.

My father was what is called an oddity, and his treatment of me, though uniformly kind, flowed less from affection and tenderness than from a sense of obligation and duty. Indeed, I seldom even spoke to him except at meal-times, and then his manner was silent and abrupt; his leisure hours, which were many, were passed either in his study or in solitary walks; in short, he seemed to take no further interest in my happiness or improvement than a conscientious regard to the discharge of his own duty would seem to claim.

Shortly before my birth a circumstance had occurred which had contributed much to form and to confirm my father's secluded habits—it was the fact that a suspicion of MURDER had fallen upon his younger brother, though not sufficiently definite to lead to an indictment, yet strong enough to ruin him in public opinion.

This disgraceful and dreadful doubt cast upon the family name, my father felt deeply and bitterly, and not the less so that he himself was thoroughly convinced of his brother's innocence. The sincerity and strength of this impression he shortly afterwards proved in a manner which produced the dark events which follow. Before, however, I enter upon the statement of them, I ought to relate the circumstances which had awakened the suspicion; inasmuch as they are in themselves somewhat curious, and, in their effects, most intimately connected with my after-history.

My uncle, Sir Arthur T——n, was a gay and extravagant man, and, among other vices, was ruinously addicted to gaming; this unfortunate propensity, even after his fortune had suffered so severely as to render inevitable a reduction in his expenses by no means inconsiderable, nevertheless continued to actuate him, nearly to the exclusion of all other pursuits; he was, however, a proud, or rather a vain man, and could not bear to make the diminution of his income a matter of gratulation and triumph to those with whom he had hitherto competed, and the consequence was, that he frequented no longer the expensive haunts of dissipation, and retired from the gay world, leaving his coterie to discover his reasons as best they might....