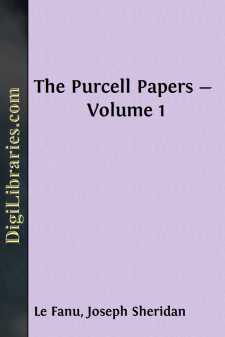 A noble Huguenot family, owning considerable property in Normandy, the Le Fanus of Caen, were, upon the revocation of the Edict of Nantes, deprived of their ancestral estates of Mandeville, Sequeville, and Cresseron; but, owing to their possessing influential relatives at the court of Louis the Fourteenth, were allowed to quit their country for England, unmolested, with their personal property. We meet with John Le Fanu de Sequeville and Charles Le Fanu de Cresseron, as cavalry officers in William the Third's army; Charles being so distinguished a member of the King's staff that he was presented with William's portrait from his master's own hand. He afterwards served as a major of dragoons under Marlborough.

At the beginning of the eighteenth century, William Le Fanu was the sole survivor of his family. He married Henrietta Raboteau de Puggibaut, the last of another great and noble Huguenot family, whose escape from France, as a child, by the aid of a Roman Catholic uncle in high position at the French court, was effected after adventures of the most romantic danger.

Joseph Le Fanu, the eldest of the sons of this marriage who left issue, held the office of Clerk of the Coast in Ireland. He married for the second time Alicia, daughter of Thomas Sheridan and sister of Richard Brinsley Sheridan; his brother, Captain Henry Le Fanu, of Leamington, being united to the only other sister of the great wit and orator.

Dean Thomas Philip Le Fanu, the eldest son of Joseph Le Fanu, became by his wife Emma, daughter of Dr. Dobbin, F.T.C.D., the father of Joseph Sheridan Le Fanu, the subject of this memoir, whose name is so familiar to English and American readers as one of the greatest masters of the weird and the terrible amongst our modern novelists.

Born in Dublin on the 28th of August, 1814, he did not begin to speak until he was more than two years of age; but when he had once started, the boy showed an unusual aptitude in acquiring fresh words, and using them correctly.

The first evidence of literary taste which he gave was in his sixth year, when he made several little sketches with explanatory remarks written beneath them, after the manner of Du Maurier's, or Charles Keene's humorous illustrations in 'Punch.'

One of these, preserved long afterwards by his mother, represented a balloon in mid-air, and two aeronauts, who had occupied it, falling headlong to earth, the disaster being explained by these words: 'See the effects of trying to go to Heaven.'

As a mere child, he was a remarkably good actor, both in tragic and comic pieces, and was hardly twelve years old when he began to write verses of singular spirit for one so young. At fourteen, he produced a long Irish poem, which he never permitted anyone but his mother and brother to read. To that brother, Mr. William Le Fanu, Commissioner of Public Works, Ireland, to whom, as the suggester of Sheridan Le Fanu's 'Phaudrig Croohore' and 'Shamus O'Brien,' Irish ballad literature owes a delightful debt, and whose richly humorous and passionately pathetic powers as a raconteur of these poems have only doubled that obligation in the hearts of those who have been happy enough to be his hearers—to Mr. William Le Fanu we are indebted for the following extracts from the first of his works, which the boy-author seems to have set any store by:

'Muse of Green Erin, break thine icy slumbers!Strike once again thy wreathed lyre!Burst forth once more and wake thy tuneful numbers!Kindle again thy long-extinguished fire!'Why should I bid thee, Muse of Erin, waken?Why should I bid thee strike thy harp once more?Better to leave thee silent and forsakenThan wake thee but thy glories to deplore.'How could I bid thee tell of Tara's Towers,Where once thy sceptred Princes sate in state—Where rose thy music, at the festive hours,Through the proud halls where listening thousandssate...?
Show more
Show less