The Public vs. M. Gustave Flaubert 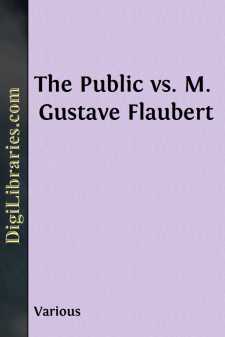 Gentlemen, in entering upon this debate, the Public Attorney is in the presence of a difficulty which he cannot ignore. It cannot be put even in the nature of a condemnation, since offenses to public morals and to religion are somewhat vague and elastic expressions which it would be necessary to define precisely. Nevertheless, when we speak to right-minded, practical men we are sure of being sufficiently understood to distinguish whether a certain page of a book carries an attack against religion and morals or not. The difficulty is not in arousing a prejudice, it is far more in explaining the work of which you are to judge. It deals entirely with romance. If it were a newspaper article which we were bringing before you, it could be seen at once where the fault began and where it ended; it would simply be read by the ministry and submitted to you for judgment. Here we are not concerned with a newspaper article, but entirely with a romance, which begins the first of October, finishes the fifteenth of December, and is composed of six numbers, in the Revue de Paris, 1856. What is to be done in such a case? What is the duty of the Public Ministry? To read the whole romance? That is impossible. On the other hand, to read only the incriminating texts would expose us to deep reproach. They could say to us: If you do not show the case in all its parts, if you pass over that which precedes and that which follows the incriminating passages, it is evident that you wish to suppress the debate by restricting the ground of discussion. In order to avoid this twofold difficulty, there is but one course to follow, and that is, to relate to you the whole story of the romance without reading any of it, or pointing out any incriminating passage; then to cite incriminating texts, and finally to answer the objections that may arise against the general method of indictment.

What is the title of the romance? Madame Bovary. This title in itself explains nothing. There is a second in parentheses: Provincial Morals and Customs. This is also a title which does not explain the thought of the author but which gives some intimation of it. The author does not endeavour to follow such or such a system of philosophy, true or false; he endeavours to produce certain pictures, and you shall see what kind of pictures! Without doubt, it is the husband who begins and who terminates the book; but the most serious portrait of the work, the one that illumines the other paintings, is that of Madame Bovary.

Here I relate, I do not cite. It takes the husband first at college, and it must be stated that the boy already gave evidence of the kind of husband he would make. He is excessively heavy and timid, so timid that when he arrives at the college and is asked his name, he responds: "Charbovari" He is so dull that he works continually without advancing. He is never the first, nor is he the last in his class; he is the type, if not of the cipher at least of the laughing-stock of the college. After finishing his studies here, he goes to study medicine at Rouen, in a fourth-story room overlooking the Seine, which his mother rented for him, in the house of a dyer of her acquaintance....