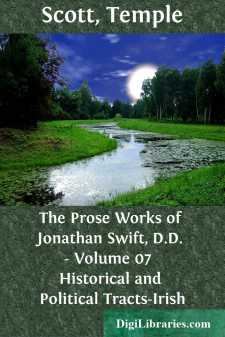 "An adequate edition of Swift—the whole of Swift, and nothing but Swift—has long been one of the pressing needs of students of English literature. Mr. Temple Scott, who is preparing the new edition of Swift's Prose Works, has begun well, his first volume is marked by care and knowledge. He has scrupulously collated his texts with the first or the best early editions, and has given various readings in the footnotes.... Mr. Temple Scott may well be congratulated on his skill and judgment as a commentator.... He has undoubtedly earned the gratitude of all admirers of our greatest satirist, and all students of vigorous, masculine, and exact English."—Athenæum.

"The volume is an agreeable one to hold and to refer to, and the notes and apparatus are, on the whole, exact. A cheap and handy reprint, which we can conscientiously recommend."—Saturday Review.

"From the specimen now before us we may safely predict that Mr. Temple Scott will easily distance both Roscoe and Scott. He deserves the gratitude of all lovers of literature for enabling Swift again to make his bow to the world in so satisfactory and complete a garb."—Manchester Guardian.

"Mr. Temple Scott's introductions and notes are excellent in all respects, and this edition of Swift is likely to be one most acceptable to scholars."—Notes and Queries.

"The new Bohn's Library edition of the prose works of Jonathan Swift is a venture which proves itself the more welcome as each instalment is issued.... This edition is likely long to remain the standard edition."—Literary World.

"'Bohn's Libraries' need no push, and the magnificent edition of 'The Prose Works of Jonathan Swift,' edited by Mr. Temple Scott, is in every respect worthy of that great collection of classics. It is an ideal edition, edited by an ideal editor, beautifully printed, handsomely bound, and ridiculously cheap. I have no hesitation in saying that this edition supersedes all its forerunners."—Star.

"We have nothing but praise for the editing, annotating, printing, and general production. Indeed, now that the set has advanced so far, we can safely pronounce the opinion that all other editions of Swift must give place to it, and that no serious student of the politics of the eighteenth century can afford to be without these volumes.... A superb edition."—Irish Times.

"Edited with exhaustive care, and produced in excellent style. This is not only the best, it is the only edition of Swift."—Pall Mall Gazette.

"There could hardly be a more acceptable addition to Bohn's Standard Library than a new edition of Swift's Prose Works. The text is well printed, and the volume is of convenient size. The edition deserves to be popular, since Swift is a writer who will always be read, while this edition will bring him within reach of a number of new readers."—Scotsman.

"The time is now ripe for a definite edition. This, of which the first volume lies before us, promises to fulfil all the conditions of a scholarly and satisfying work.......