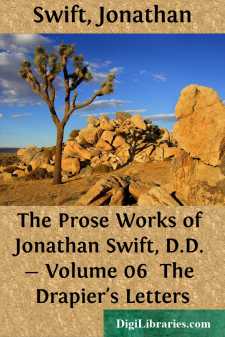 LETTER I. TO THE SHOP-KEEPERS, TRADESMEN, FARMERS, AND COMMON-PEOPLE OF IRELAND. NOTE

About the year 1720 it was generally acknowledged in Ireland that there was a want there of the small change, necessary in the transaction of petty dealings with shopkeepers and tradesmen. It has been indignantly denied by contemporary writers that this small change meant copper coins. They asserted that there was no lack of copper money, but that there was a great want of small silver. Be that as it may, the report that small change was wanting was sufficiently substantiated to the English government to warrant it to proceed to satisfy the want. In its dealings with Ireland, however, English governments appear to have consistently assumed that attitude which would most likely cause friction and arouse disturbance. In England coins for currency proceeded from a mint established under government supervision. In Scotland such a mint was specially provided for in the Act of Union. But in Ireland, the government acted otherwise.

The Irish people had again and again begged that they should be permitted to establish a mint in which coins could be issued of the same standard and intrinsic value as those used in England. English parliaments, however, invariably disregarded these petitions. Instead of the mint the King gave grants or patents by which a private individual obtained the right to mint coins for the use of the inhabitants. The right was most often given for a handsome consideration, and held for a term of years. In 1660 Charles II. granted such a patent to Sir Thomas Armstrong, permitting him to coin farthings for twenty years. It appears, however, that Armstrong never actually coined the farthings, although he had gone to the expense of establishing a costly plant for the purpose.

Small copper coins becoming scarce, several individuals, without permission, issued tokens; but the practice was stopped. In 1680 Sir William Armstrong, son of Sir Thomas, with Colonel George Legg (afterwards Lord Dartmouth), obtained a patent for twenty-one years, granting them the right to issue copper halfpence. Coins were actually struck and circulated, but the patent itself was sold to John Knox in the very year of its issue. Knox, however, had his patent specially renewed, but his coinage was interrupted when James II. issued his debased money during the Revolution (see Monck Mason, p. 334, and the notes on this matter to the Drapier's Third Letter, in present edition).

Knox sold his patent to Colonel Roger Moore, who overstocked the country with his coins to such an extent that the currency became undervalued. When, in 1705, Moore endeavoured to obtain a renewal of his patent, his application was refused. By 1722, owing either to Moore's bad coinage, or to the importation of debased coins from other countries, the copper money had degraded considerably. In a pamphlet[1] issued by George Ewing in Dublin (1724), it is stated that in that year, W. Trench presented a memorial to the Lords of the Treasury, complaining of the condition of the copper coinage, and pointing out that the evil results had been brought about by the system of grants to private individuals....