The Prose Works of Jonathan Swift, D.D. - Volume 04 Swift's Writings on Religion and the Church - Volume 2 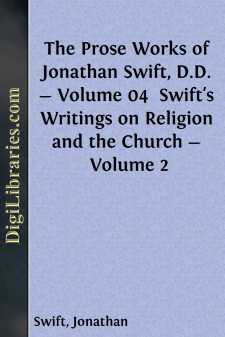 In the "foreword" to the reprint of this tract in the "Miscellanies" of 1711, Swift remarks: "I have been assured that the suspicion which the supposed author lay under for writing this letter absolutely ruined him with the late ministry." The "late ministry" was the Whig ministry of which Godolphin was the Premier. To this ministry the repeal of the Test Act was a matter of much concern. To test the effect of such a repeal it was determined to try it in Ireland first. There the Presbyterians had distinguished themselves by their loyalty to William and the Protestant succession. These, therefore, offered a good excuse for the introduction of such a measure, particularly when, in 1708, an invasion was rumoured, they were the first to send in loyal addresses to the Queen. Swift likened this method to "that of a discreet physician, who first gives a new medicine to a dog, before he prescribes it to a human creature." Further, the Speaker of the Irish House had come over to England to agitate for the repeal. On this matter Swift wrote to Archbishop King, under date April 15th (the letter was first published by Mr. John Forster in his "Life of Swift," p. 246), as follows: "Some days ago my Lord Somers entered with me into discourse about the Test clause, and desired my opinion upon it, which I gave him truly, though with all the gentleness I could; because, as I am inclined and obliged to value the friendship he professes for me, so he is a person whose favour I would engage in the affairs of the First Fruits…. If it became me to give ill names to ill things and persons, I should be at a loss to find bad enough for the villainy and baseness of a certain lawyer of Ireland [Speaker Brodrick, afterwards Lord Midleton], who is in a station the least of all others excusable for such proceedings, and yet has been going about most industriously to all his acquaintance of both houses towards the end of the session to show the necessity of taking off the Test clause in Ireland by an act here, wherein you may be sure he had his brother's assistance. If such a project should be resumed next session, and I in England, unless your grace send me your absolute commands to the contrary, which I should be sorry to receive, I could hardly forbear publishing some paper in opposition to it, or leaving one behind me, if there should be occasion." In August of the same year the agitation for the repeal was renewed, and in December Swift published his "Letter on the Sacramental Test," writing as if from Dublin and as a member of the Irish House of Commons. When he writes to King in the following month he makes a mild attempt to convince the Archbishop that the pamphlet was not of his authorship. "The author has gone out of his way to reflect on me as a person likely to write for repealing the test, which I am sure is very unfair treatment. This is all I am likely to get by the company I keep. I am used like a sober man with a drunken face, have the scandal of the vice without the satisfaction." But King was not deceived. In his reply to Swift he simply remarks: "You need not be concerned: I will engage you will lose nothing by that paper." Swift, however, lost more than the Archbishop thought; for "that paper" led to his severance from the Whigs, and, in after life, to much contumely cast on his character for being a political renegade. Because "he was not Whig enough;" because he would not forsake his Church for his party, critics and biographers have thought fit to make little of him, and to compare him to his discredit with contemporaries whose intellects he held in the palm of his hand, and to whom he might have stood as a moral exemplar.

Swift refers to this tract in his "Memoirs relating to the change in the Queen's Ministry," as follows:—"It was everybody's opinion, that the Earl of Wharton would endeavour, when he went to Ireland, to take off the test, as a step to have it taken off here: upon which I drew up and printed a pamphlet, by way of a letter from a member of parliament here, shewing the danger to the Church by such an intent. Although I took all care to be private, yet the Lieutenant's chaplain, and some others guessed me to be the author, and told his Excellency their suspicions; whereupon I saw him no more until I went to Ireland."

The tract is one of the most favourable specimens of Swift's controversial method and trenchant satire. The style is excellent—forcible and pithy; while the arguments are like most of Swift's arguments, aptly to the point with yet a potentiality of application which fits them for the most general statement of the principles under discussion. Scott considers the pamphlet "as having materially contributed to the loss of the bill for repeal of the Test Act during the Earl of Pembroke's vice-royalty." In the same year Swift wrote "A Letter to a Member of Parliament in Ireland on choosing a new Speaker there." This short tract bears also on the question of the Test; but it is not included in this volume, since it was intended as an electioneering pamphlet.

I have been unable to obtain access to a copy of the first edition of the "Letter on the Sacramental Test." The text here given is that of the "Miscellanies" of 1711, collated with that given in the "Miscellanies," 1728, and with those printed by Faulkner, Hawkesworth, and Scott.

[Footnote 1: This "Advertisement" is taken from "Miscellanies in Prose and Verse," printed for John Morphew, 1711. On page 314 of that volume it forms a "foreword" to "A Letter concerning the Sacramental Test." It is omitted from the reprint in the "Miscellanies" of 1728. The page which Swift says he has taken leave to omit cannot be identified. Probably this was another of Swift's manoeuvres for concealing the identity of the author. The "Advertisement" of George Faulkner to his edition of Swift's Works (vol. iv., 1735) is as follows:

"In the second volume of Doctor Swift's and Mr. Pope's 'Miscellanies,' I found the following treatise, which had been printed in London, with some other of the Dean's works, many years before, but at first came out by itself in the year 1708, as the date shews: And it was at a juncture when the Dissenters were endeavouring to repeal the Sacramental Test, as by common fame, and some pamphlets published to the same purpose, they seem to be now again attempting, with great hope of success. I have, therefore, taken the liberty to make an extract out of that discourse, omitting only some passages which relate to certain persons, and are of no consequence to the argument. But the author's weight of reasoning seems at present to have more weight than it had in those times, when the discourse first appeared....