The Prose Works of Jonathan Swift, D.D. - Volume 03 Swift's Writings on Religion and the Church - Volume 1 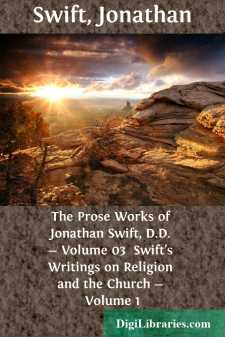 The inquiry into the religious thought of the eighteenth century forms one of the most interesting subjects for speculation in the history of the intellectual development of western nations. It is true, that in that history Swift takes no special or distinguished part; but he forms a figure of peculiar interest in a special circle of his own. Swift had no natural bent for the ministry of a church; his instincts, his temperament, his intellect, were of that order which fitted him for leadership and administration. He was a born magistrate and commander of men. It is, therefore, one of the finest compliments we can pay Swift to say, that no more faithful, no more devoted, no stauncher servant has that Church possessed; for we must remember the proud and haughty temper which attempted to content itself with the humdrum duties of a parish life. Swift entered the service of that Church at a time when its need for such a man was great; and in spite of its disdain of his worth, in spite of its failure to recognize and acknowledge his transcendent qualities, he never forgot his oath, and never shook in his allegiance. To any one, however, who reads carefully his sermons, his "Thoughts on Religion," and his "Letter to a Young Clergyman," there comes a question—whether, for his innermost conscience, Swift found a satisfying conviction in the doctrines of Christianity. "I am not answerable to God," he says, "for the doubts that arise in my own breast, since they are the consequence of that reason which he hath planted in me, if I take care to conceal those doubts from others, if I use my best endeavours to subdue them, and if they have no influence on the conduct of my life." We search in vain, in any of his writings, for any definite expression of doubt or want of faith in these doctrines. When he touches on them, as he does in the sermon "On the Trinity," he seems to avoid of set purpose, rational inquiry, and contents himself with insisting on the necessity for a belief in those mysteries concerning God about which we cannot hope to know anything. "I do not find," he says, in his "Letter to a Young Clergyman," "that you are anywhere directed in the canons or articles to attempt explaining the mysteries of the Christian religion; and, indeed, since Providence intended there should be mysteries, I don't see how it can be agreeable to piety, orthodoxy, or good sense to go about such a work. For to me there seems a manifest dilemma in the case; if you explain them, they are mysteries no longer; if you fail, you have laboured to no purpose."

It must at once be admitted that Swift had not the metaphysical bent; philosophy—in our modern sense of the word—was to him only a species of word spinning. That only was valuable which had a practical bearing on life—and Christianity had that. He found in Christianity, as he knew it—in the Church of England, that is to say—an excellent organization, which recognized the frailties of human nature, aimed at making healthier men's souls, and gave mankind a reasonable guidance in the selection of the best motives to action....