The Problem of China 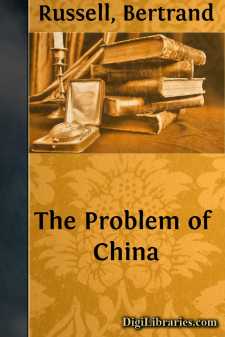 A European lately arrived in China, if he is of a receptive and reflective disposition, finds himself confronted with a number of very puzzling questions, for many of which the problems of Western Europe will not have prepared him. Russian problems, it is true, have important affinities with those of China, but they have also important differences; moreover they are decidedly less complex. Chinese problems, even if they affected no one outside China, would be of vast importance, since the Chinese are estimated to constitute about a quarter of the human race. In fact, however, all the world will be vitally affected by the development of Chinese affairs, which may well prove a decisive factor, for good or evil, during the next two centuries. This makes it important, to Europe and America almost as much as to Asia, that there should be an intelligent understanding of the questions raised by China, even if, as yet, definite answers are difficult to give.

The questions raised by the present condition of China fall naturally into three groups, economic, political, and cultural. No one of these groups, however, can be considered in isolation, because each is intimately bound up with the other two. For my part, I think the cultural questions are the most important, both for China and for mankind; if these could be solved, I would accept, with more or less equanimity, any political or economic system which ministered to that end. Unfortunately, however, cultural questions have little interest for practical men, who regard money and power as the proper ends for nations as for individuals. The helplessness of the artist in a hard-headed business community has long been a commonplace of novelists and moralizers, and has made collectors feel virtuous when they bought up the pictures of painters who had died in penury. China may be regarded as an artist nation, with the virtues and vices to be expected of the artist: virtues chiefly useful to others, and vices chiefly harmful to oneself. Can Chinese virtues be preserved? Or must China, in order to survive, acquire, instead, the vices which make for success and cause misery to others only? And if China does copy the model set by all foreign nations with which she has dealings, what will become of all of us?

China has an ancient civilization which is now undergoing a very rapid process of change. The traditional civilization of China had developed in almost complete independence of Europe, and had merits and demerits quite different from those of the West. It would be futile to attempt to strike a balance; whether our present culture is better or worse, on the whole, than that which seventeenth-century missionaries found in the Celestial Empire is a question as to which no prudent person would venture to pronounce. But it is easy to point to certain respects in which we are better than old China, and to other respects in which we are worse. If intercourse between Western nations and China is to be fruitful, we must cease to regard ourselves as missionaries of a superior civilization, or, worse still, as men who have a right to exploit, oppress, and swindle the Chinese because they are an "inferior" race....