The Principal Navigations, Voyages, Traffiques and Discoveries of the English Nation - Volume 11 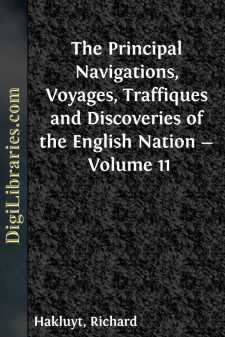 The same in English.

Thomas Chaloner was by birth a Londiner, by studie a Cantabrigian, by education a Courtier, by religion a deuout and true Christian. Therefore after he had confirmed his youth and minde in the studies of good learning, when Sir Henry Kneuet was sent ambassadour from the mighty Prince Henry the 8. to the Emperour Charles the fift, he went with him as his familiar friend, or as one of his Councell. At which time the said Charles the 5. passing ouer from Genoa and Corsica to Alger in Africa in warlike sort, with a mighty army by sea, that honourable Kneuet the kings ambassadour, Thomas Chaloner, Henry Knolles, and Henry Isham, right worthy persons, of their owne accord accompanied him in that expedition, and serued him in that warre, wherin Thomas Chaloner escaped most wonderfully with his life. For the galley wherein he was, being either dashed against the rockes, or shaken with mighty stormes, and so cast away, after he had saued himselfe a long while by swimming, when his strength failed him, his armes and hands being faint and weary, with great difficulty laying hold with his teeth on a cable, which was cast out of the next gally, not without breaking and losse of certaine of his teeth, at length recouered himselfe, and returned home into his countrey in safety.

The woorthy enterprise of Iohn Foxe an Englishman in deliuering 266.Christians out of the captiuitie of the Turkes at Alexandria, the 3 ofIanuarie 1577.

Among our Merchants here in England, it is a common voiage to traffike into Spaine: whereunto a ship, being called The three halfe Moones, manned with 38. men, and well fensed with munitions, the better to encounter their enemies withall, and hauing wind and tide, set from Portsmouth, 1563. and bended her iourney toward Siuill a citie in Spaine, intending there to traffique with them. [Sidenote: Iohn Foxe taken 1563.] And felling neere the Streights, they perceiued themselues to be beset round with eight gallies of the Turkes, in such wise, that there was no way for them to flie or escape away, but that either they must yeeld or els be sunke. Which the owner perceiuing, manfully encouraged his company, exhorting them valiantly to shew their manhood, shewing them that God was their God, and not their enemies, requesting them also not to faint in seeing such a heape of their enemies ready to deuour them; putting them in mind also, that if it were Gods pleasure to giue them into their enemies hands, it was not they that ought to shew one displeasant looke or countenance there against; but to take it patiently, and not to prescribe a day and time for their deliuerance, as the citizens of Bethulia did, but to put themselues vnder his mercy. And againe, if it were his mind and good will to shew his mighty power by them, if their enemies were ten times so many, they were not able to stand in their hands; putting them likewise in mind of the old and ancient woorthinesse of their countreymen, who in the hardest extremities haue alwayes most preuailed and gone away conquerors, yea, and where it hath bene almost impossible....