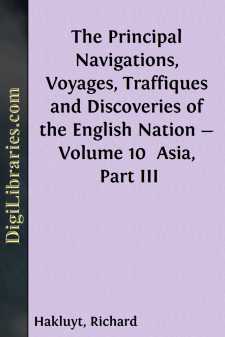 NAVIGATIONS, VOYAGES, TRAFFIQUES, AND DISCOVERIES OF THE ENGLISH NATION IN ASIA.

The manner of the entring of Soliman the great Turke, with his armie into Aleppo in Syria, marching towards Persia against the Great Sophie, the fourth day of Nouember, 1553, noted by Master Anthony Ienkinson, present at that time.

After, marched 10000 men, called Nortans, which be tributaries to the Great Turke, clothed all in yellow veluet, and hats of the same, of the Tartary fashion, two foote long, with a great role of the same colour about their foreheads, richly decked, with their bowes in their hands, of the Turkish fashion.

After them marched foure Captaines, men of armes, called in Turkish Saniaques, clothed all foure in crimson veluet, euery one hauing vnder his banner twelue thousand men of armes well armed with their morrions vpon their heads, marching in good order, with a short weapon by their sides, called in their language, Simiterro.

After came 16000 Ianizaries, called the slaues of the Grand Signior, all a foote, euery one hauing his harquebush, who be his gard, all clothed in violet silke, and apparelled vpon their heads with a strange forme, called Cuocullucia, fashioned in this sort: the entering in of the forehead is like a skull made of white veluet, and hath a traine hanging downe behind, in manner of a French hoode, of the same, colour, and vpon the forepart of the said skull, iust in the middes of his forehead there is standing bolt vpright like a trunke of a foote long of siluer, garnished most richly with Goldsmiths worke, and precious stones, and in the top of the said trunke a great bush of fethers, which waueth vp and downe most brauely when he marcheth.

After this, there cam 1000. pages of honour; all clothed in cloth of gold, the halfe of them carying harquebushes, and the other halfe, Turkish bowes, with the trusses of arrowes, marching in good order.

Then came three men of armes well armed, and vpon their harnesse coates of the Turkes fashion, of Libard skinnes, and murrions vpon their heads, their speares charged, and all the end of their staffe hard by the head of the speare, a horse taile died in a bloody colour, which is their ensigne: they be the chalengers for the Turkes owne person.

After them came seuen pages of honour in cloth of siluer, vpon seuen white horses, which horses were couered with cloth of siluer, all embrodered and garnished with precious stones, emerauds, diamonds, and rubies most richly.

After them also came sixe more pages of honour, clothed in cloth of gold, euery one hauing his bowe in his hand, and his fawchine of the Turkes fashion by his side.

Immediately after them came the great Turke himselfe with great pompe and magnificence, vsing in his countenance and gesture a wonderfull maiestie, hauing onely on each side of his person one page clothed with cloth of gold: he himselfe was mounted vpon a goodly white horse, adorned with a robe of cloth of gold, embrodered most richly with the most precious stones, and vpon his head a goodly white tucke, containing in length by estimation fifteene yards, which was of silke and linnen wouen together, resembling something Callicut cloth, but is much more fine and rich, and in the top of his crowne, a litle pinnach of white Ostrich feathers, and his horse most richly apparelled in all points correspondent to the same....