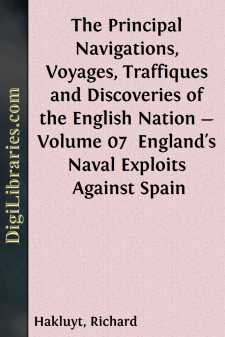 A voyage to the Azores with two pinases, the one called the Serpent, and the other the Mary Sparke of Plimouth, both of them belonging to Sir Walter Raleigh, written by John Euesham Gentleman, wherein were taken the gouernour, of the Isle of Sainct Michael, and Pedro Sarmiento gouernour of the Straits of Magalanes, in the yeere 1586.

[Sidenote: The gouernour of S. Michael taken prisoner.] The 10. of June 1586. we departed from Plimouth with two Pinases, the one named the Serpent, of the burden of 35. Tunnes and the other the Mary Sparke of Plimouth of the burthen of 50. Tuns, both of them belonging to sir Walter Raleigh knight; and directing our course towards the coast of Spaine, and from thence towards the Isles of the Azores, we tooke a small barke laden with Sumacke and other commodities, wherein was the gouernour of S. Michaels Island, being a Portugal, having other Portugals and Spaniards with him. And from thence we sailed to the Island of Graciosa, to the Westward of the Island of Tercera, where we discried a saile, and bearing with her wee found her to be a Spaniard: But at the first not greatly respecting whom we tooke, so that we might haue enriched ourselves, which was the cause of this our trauaile, and for that we would not bee knowen of what nation we were, wee displayed a white silke ensigne in our maine toppe, which they seeing, made accompt that we had bene some of the king of Spaines Armadas, lying in wait for English men of war: but when we came within shot of her, we tooke downe our white flagge, and spread abroad the Crosse of S. George, which when they saw, it made them to flie as fast as they might, but all their haste was in vaine, for our shippes were swifter of saile then they, which they fearing, did presently cast their ordinance and small shot with many letters, and the draft of the Straights of Magelan into the Sea, [Sidenote: Pedro Sarmiento the governour of the Straights of Magellan taken prisoner.] and thereupon immediately we tooke her, wherein wee also tooke a gentleman of Spaine, named Pedro Sarmiento, gouernour of the Straights of Magelan, which said Pedro we brought into England with us, and presented him to our soueraigne Lady the Queene.

[Sidenote: A ship laden with fish taken and released againe.] After this, lying off and about the Islands, wee descried another saile, and bearing after her, we spent the maine maste of our Admirall, but yet in the night our Viceadmirall tooke her, being laden with fish from Cape Blanke, the which shippe wee let goe againe for want of men to bring her home. The next day we descried two other sailes, the one a shippe and the other a Carauel, to whom we gaue chase, which they seeing, with all speede made in vnder the Isle of Graciosa, to a certaine Fort there for their succour, where they came to an anker, and hauing the winde of vs, we could not hurt them with our ships, but we hauing a small boate which we called a light horseman, wherein my selfe was, being a Musqueter, and foure more with Caliuers, and foure that rowed, came neere vnto the shore against the winde, which when they saw vs come towards them they carried a great part of their marchandize on land, whither also the men of both vessels went and landed, [Sidenote: One of the ships taken and sent away with 2. persons.] and as soon as we came within Musquet shot, they began to shoote at vs with great ordinance and small shot, and we likewise at them, and in the ende we boorded one wherein was no man left, so we cut her cables, hoysed her sailes, and sent her away with two of our men, [Sidenote: The Caravel is taken.] and the other 7....