The Principal Navigations, Voyages, Traffiques and Discoveries of the English Nation - Volume 05 Central and Southern Europe 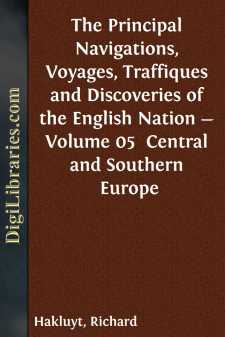 A Catalogue of the great Masters of the Order of the Dutch knights, commonly called the Hospitalaries of Ierusalem: and what great exploites euery of the saide Masters hath atchieued either in conquering the land of Prussia, or in taming and subduing the Infidels, or els in keeping them vnder their obedience and subiection, taken out of Munster.

The order of the Dutch knights had their first original at Ierusalem in the yere of our Lorde 1190. within the Hospitall of the blessed Virgine: and the first Master of the saide order was called Henrie of Walpot, vnder whome many good things, and much wealth and riches were throughout all Germanie and Italie procured vnto the order: and the saide Hospitall was remoued from Ierusalem vnto Ptolemais, otherwise called Acon, and the foresaid Order grew and mightily increased, whereof I will hereafter discourse more at large in my Treatise of Syria. Henrie of Walpot deceased in the yeere of Christ 1200. The 2. Master was Otto of Kerpen, and he continued Master of the Order for the space of sixe yeeres. The 3. was Hermannus Bart a godly and deuout person, who deceased in the yeere 1210. being interred at Acon, as his predecessors were. The 4. was Hermannus de Saltza, who thirtie yeeres together gouerned the saide Order, and managed the first expedition of warre against the Infidels of Prussia, and ordained another Master also in Prussia to bee his Deputie in the same region. [Sidenote: Ensiferi fratres.] In the yeere 1239. the knights of the sword, who trauailed into Liuonia to conuert the inhabitants thereof vnto Christ, seeing they were not of sufficient force to performe that enterprise, and that their enemies increased on all sides, they vnited themselues vnto the famous Order of the Dutch knights in Prussia, that their worthie attempt might bee defended and promoted by the aide and assistance of the saide Dutch knights. [Sidenote: The first war moued against the Prussian infidels, anno dom. 1239.] At the very same time the ensigne of the crosse was exalted throughout all Germanie against the Prussians, and a great armie of souldiers was gathered together, the Burgraue of Meidenburg being generall of the armie, who combining themselues vnto the Dutch knights, ioyned battell with the Infidels, and slew about fiue hundred Gentiles, who beforetime had made horrible inuasions and in-roades into the dominions of Christians wasting all with fire and sword, but especially the land of Colm, and Lubonia, which were the Prouinces of Conradus Duke of Massouia. Nowe, the foresaide knights hauing made so huge a slaughter, built the castle of Reden, betweene Pomerania and the land of Colm, and so by degrees they gotte footing in the lande, and daylie erected more castles, as namely, Crutzburg, Wissenburg, Resil, Bartenstein, Brunsburg, and Heilsburg, and furnished them all with garrisons. The fift Master of the Order was Conradus Landgrauius, the brother of Lodouick, which was husband vnto Ladie Elizabeth. This, Conradus, by his fathers inheritance, gaue great riches and possessions vnto the Order, and caused Ladie Elizabeth to be interred at Marpurg, within the religious house of his saide Order....