The Principal Navigations, Voyages, Traffiques, and Discoveries of The English Nation, Vol. XII., America, Part I. 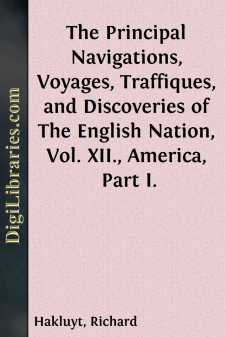 Principall Secretarie to her Maiestie, Master of the Court of Wards and  Liueries, and one of her Maiesties most honourable Priuie Councell.

Right honourable, your fauourable acceptance of my second volume of the English voyages offred vnto you the last yere, your perusing of the same at your conuenient leasure, your good testimony of my selfe and of my trauailes therein, together with the infallible signes of your earnest desire to doe mee good, which very lately, when I thought least thereof, brake forth into most bountiful and acceptable effects: these considerations haue throughly animated and encouraged me to present vnto your prudent censure this my third and last volume also. The subiect and matter herein contained is the fourth part of the world, which more commonly then properly is called America: but by the chiefest Authors The new world. New, in regard of the new and late discouery thereof made by Christopher Colon, aliàs Columbus, a Genouois by nation, in the yere of grace 1492. And world, in respect of the huge extension thereof, which to this day is not throughly discouered, neither within the Inland nor in the coast, especially toward the North and Northwest, although on the either side it be knowen vnto vs for the space of fiue thousand leagues at the least, compting and considering the trending of the land, and for 3000. more on the backeside in the South Sea from the Streight of Magellan to Cape Mendoçino and Noua Albion. So that it seemeth very fitly to be called A newe worlde. Howbeit it cannot be denied but that Antiquitie had some kinde of dimme glimse, and vnperfect notice thereof. Which may appeare by the relation of Plato in his two worthy dialogues of Timæus and Critias vnder the discourse of that mighty large yland called by him Atlantis, lying in the Ocean sea without the Streight of Hercules, now called the Straight of Gibraltar, being (as he there reporteth) bigger then Africa and Asia: And by that of Aristotle in his booke De admirandis auditionibus of the long nauigation of certaine Carthaginians, who sayling forth of the aforesaid Streight of Gibraltar into the maine Ocean for the space of many dayes, in the ende found a mighty and fruitfull yland, which they would haue inhabited, but were forbidden by their Senate and chiefe gouernours. Moreouer, aboue 300. yeeres after these wee haue the testimony of Diodorus Siculus lib. 5 cap. 7. of the like mighty yland discouered in the Westerne Ocean by the Tyrrheni, who were forbidden for certaine causes to inhabite the same by the foresaid Carthaginians. And Senecca in his tragedie intituled Medea foretold aboue 1500. yeeres past, that in the later ages the Ocean would discouer new worlds, and that the yle of Thule would no more be the vttermost limite of the earth. For whereas Virgile had said to Augustus Caesar, Tibi seruiat vltima Thule, alluding thereunto he contradicteth the same, and saith, Nec sit terris vltima Thule. Yea Tertullian, one of our most ancient and learned diuines, in the beginning of his treatise de Pallio alludeth vnto Plato his Westerne Atlantis, which there by another name he calleth Aeon, saying Aeon in Atlantico nunc quæritur....