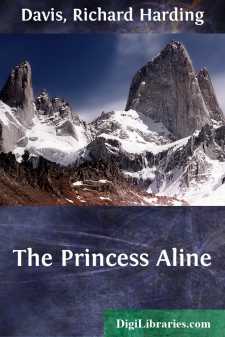 H. R. H. the Princess Aline of Hohenwald came into the life of Morton Carlton--or "Morney" Carlton, as men called him--of New York city, when that young gentleman's affairs and affections were best suited to receive her. Had she made her appearance three years sooner or three years later, it is quite probable that she would have passed on out of his life with no more recognition from him than would have been expressed in a look of admiring curiosity.

But coming when she did, when his time and heart were both unoccupied, she had an influence upon young Mr. Carlton which led him into doing several wise and many foolish things, and which remained with him always. Carlton had reached a point in his life, and very early in his life, when he could afford to sit at ease and look back with modest satisfaction to what he had forced himself to do, and forward with pleasurable anticipations to whatsoever he might choose to do in the future. The world had appreciated what he had done, and had put much to his credit, and he was prepared to draw upon this grandly.

At the age of twenty he had found himself his own master, with excellent family connections, but with no family, his only relative being a bachelor uncle, who looked at life from the point of view of the Union Club's windows, and who objected to his nephew's leaving Harvard to take up the study of art in Paris. In that city (where at Julian's he was nicknamed the junior Carlton, for the obvious reason that he was the older of the two Carltons in the class, and because he was well dressed) he had shown himself a harder worker than others who were less careful of their appearance and of their manners. His work, of which he did not talk, and his ambitions, of which he also did not talk, bore fruit early, and at twenty-six he had become a portrait-painter of international reputation. Then the French government purchased one of his paintings at an absurdly small figure, and placed it in the Luxembourg, from whence it would in time depart to be buried in the hall of some provincial city; and American millionaires, and English Lord Mayors, members of Parliament, and members of the Institute, masters of hounds in pink coats, and ambassadors in gold lace, and beautiful women of all nationalities and conditions sat before his easel. And so when he returned to New York he was welcomed with an enthusiasm which showed that his countrymen had feared that the artistic atmosphere of the Old World had stolen him from them forever. He was particularly silent, even at this date, about his work, and listened to what others had to say of it with much awe, not unmixed with some amusement, that it should be he who was capable of producing anything worthy of such praise. We have been told what the mother duck felt when her ugly duckling turned into a swan, but we have never considered how much the ugly duckling must have marvelled also.

He had never understood why such a responsibility had been intrusted to him. It was, as he expressed it, not at all in his line, and young girls who sought to sit at the feet of the master found him making love to them in the most charming manner in the world, as though he were not entitled to all the rapturous admiration of their very young hearts, but had to sue for it like any ordinary mortal....