The Prince and the Pauper, Part 9. 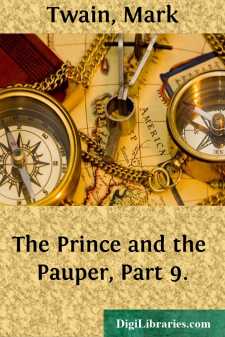 Let us go backward a few hours, and place ourselves in Westminster Abbey, at four o'clock in the morning of this memorable Coronation Day.  We are not without company; for although it is still night, we find the torch-lighted galleries already filling up with people who are well content to sit still and wait seven or eight hours till the time shall come for them to see what they may not hope to see twice in their lives—the coronation of a King.  Yes, London and Westminster have been astir ever since the warning guns boomed at three o'clock, and already crowds of untitled rich folk who have bought the privilege of trying to find sitting-room in the galleries are flocking in at the entrances reserved for their sort.

The hours drag along tediously enough.  All stir has ceased for some time, for every gallery has long ago been packed.  We may sit, now, and look and think at our leisure.  We have glimpses, here and there and yonder, through the dim cathedral twilight, of portions of many galleries and balconies, wedged full with other people, the other portions of these galleries and balconies being cut off from sight by intervening pillars and architectural projections.  We have in view the whole of the great north transept—empty, and waiting for England's privileged ones.  We see also the ample area or platform, carpeted with rich stuffs, whereon the throne stands.  The throne occupies the centre of the platform, and is raised above it upon an elevation of four steps. Within the seat of the throne is enclosed a rough flat rock—the stone of Scone—which many generations of Scottish kings sat on to be crowned, and so it in time became holy enough to answer a like purpose for English monarchs.  Both the throne and its footstool are covered with cloth of gold.

Stillness reigns, the torches blink dully, the time drags heavily. But at last the lagging daylight asserts itself, the torches are extinguished, and a mellow radiance suffuses the great spaces. All features of the noble building are distinct now, but soft and dreamy, for the sun is lightly veiled with clouds.

At seven o'clock the first break in the drowsy monotony occurs; for on the stroke of this hour the first peeress enters the transept, clothed like Solomon for splendour, and is conducted to her appointed place by an official clad in satins and velvets, whilst a duplicate of him gathers up the lady's long train, follows after, and, when the lady is seated, arranges the train across her lap for her.  He then places her footstool according to her desire, after which he puts her coronet where it will be convenient to her hand when the time for the simultaneous coroneting of the nobles shall arrive.

By this time the peeresses are flowing in in a glittering stream, and the satin-clad officials are flitting and glinting everywhere, seating them and making them comfortable.  The scene is animated enough now.  There is stir and life, and shifting colour everywhere.  After a time, quiet reigns again; for the peeresses are all come and are all in their places, a solid acre or such a matter, of human flowers, resplendent in variegated colours, and frosted like a Milky Way with diamonds....