The Prince and the Pauper, Part 8. 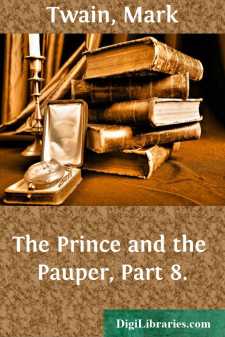 The cells were all crowded; so the two friends were chained in a large room where persons charged with trifling offences were commonly kept. They had company, for there were some twenty manacled and fettered prisoners here, of both sexes and of varying ages,—an obscene and noisy gang.  The King chafed bitterly over the stupendous indignity thus put upon his royalty, but Hendon was moody and taciturn.  He was pretty thoroughly bewildered; he had come home, a jubilant prodigal, expecting to find everybody wild with joy over his return; and instead had got the cold shoulder and a jail.  The promise and the fulfilment differed so widely that the effect was stunning; he could not decide whether it was most tragic or most grotesque.  He felt much as a man might who had danced blithely out to enjoy a rainbow, and got struck by lightning.

But gradually his confused and tormenting thoughts settled down into some sort of order, and then his mind centred itself upon Edith.  He turned her conduct over, and examined it in all lights, but he could not make anything satisfactory out of it.  Did she know him—or didn't she know him?  It was a perplexing puzzle, and occupied him a long time; but he ended, finally, with the conviction that she did know him, and had repudiated him for interested reasons.  He wanted to load her name with curses now; but this name had so long been sacred to him that he found he could not bring his tongue to profane it.

Wrapped in prison blankets of a soiled and tattered condition, Hendon and the King passed a troubled night.  For a bribe the jailer had furnished liquor to some of the prisoners; singing of ribald songs, fighting, shouting, and carousing was the natural consequence.  At last, a while after midnight, a man attacked a woman and nearly killed her by beating her over the head with his manacles before the jailer could come to the rescue.  The jailer restored peace by giving the man a sound clubbing about the head and shoulders—then the carousing ceased; and after that, all had an opportunity to sleep who did not mind the annoyance of the moanings and groanings of the two wounded people.

During the ensuing week, the days and nights were of a monotonous sameness as to events; men whose faces Hendon remembered more or less distinctly, came, by day, to gaze at the 'impostor' and repudiate and insult him; and by night the carousing and brawling went on with symmetrical regularity.  However, there was a change of incident at last. The jailer brought in an old man, and said to him—

"The villain is in this room—cast thy old eyes about and see if thou canst say which is he."

Hendon glanced up, and experienced a pleasant sensation for the first time since he had been in the jail.  He said to himself, "This is Blake Andrews, a servant all his life in my father's family—a good honest soul, with a right heart in his breast. That is, formerly.  But none are true now; all are liars.  This man will know me—and will deny me, too, like the rest."

The old man gazed around the room, glanced at each face in turn, and finally said—

"I see none here but paltry knaves, scum o' the streets....