The Prince and the Pauper, Part 7. 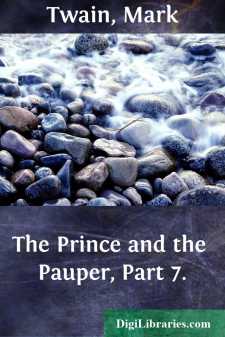 Chapter XXII. A victim of treachery.

Once more 'King Foo-foo the First' was roving with the tramps and outlaws, a butt for their coarse jests and dull-witted railleries, and sometimes the victim of small spitefulness at the hands of Canty and Hugo when the Ruffler's back was turned.  None but Canty and Hugo really disliked him.  Some of the others liked him, and all admired his pluck and spirit.  During two or three days, Hugo, in whose ward and charge the King was, did what he covertly could to make the boy uncomfortable; and at night, during the customary orgies, he amused the company by putting small indignities upon him—always as if by accident.  Twice he stepped upon the King's toes—accidentally—and the King, as became his royalty, was contemptuously unconscious of it and indifferent to it; but the third time Hugo entertained himself in that way, the King felled him to the ground with a cudgel, to the prodigious delight of the tribe.  Hugo, consumed with anger and shame, sprang up, seized a cudgel, and came at his small adversary in a fury.  Instantly a ring was formed around the gladiators, and the betting and cheering began.

But poor Hugo stood no chance whatever.  His frantic and lubberly 'prentice-work found but a poor market for itself when pitted against an arm which had been trained by the first masters of Europe in single-stick, quarter-staff, and every art and trick of swordsmanship.  The little King stood, alert but at graceful ease, and caught and turned aside the thick rain of blows with a facility and precision which set the motley on-lookers wild with admiration; and every now and then, when his practised eye detected an opening, and a lightning-swift rap upon Hugo's head followed as a result, the storm of cheers and laughter that swept the place was something wonderful to hear.  At the end of fifteen minutes, Hugo, all battered, bruised, and the target for a pitiless bombardment of ridicule, slunk from the field; and the unscathed hero of the fight was seized and borne aloft upon the shoulders of the joyous rabble to the place of honour beside the Ruffler, where with vast ceremony he was crowned King of the Game-Cocks; his meaner title being at the same time solemnly cancelled and annulled, and a decree of banishment from the gang pronounced against any who should thenceforth utter it.

All attempts to make the King serviceable to the troop had failed. He had stubbornly refused to act; moreover, he was always trying to escape.  He had been thrust into an unwatched kitchen, the first day of his return; he not only came forth empty-handed, but tried to rouse the housemates. He was sent out with a tinker to help him at his work; he would not work; moreover, he threatened the tinker with his own soldering-iron; and finally both Hugo and the tinker found their hands full with the mere matter of keeping his from getting away.  He delivered the thunders of his royalty upon the heads of all who hampered his liberties or tried to force him to service....