The Prince and the Pauper, Part 6. 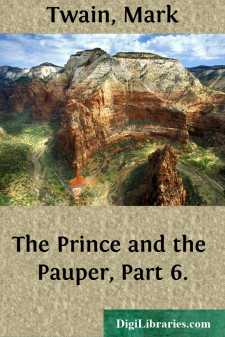 Chapter XVIII. The Prince with the tramps.

The troop of vagabonds turned out at early dawn, and set forward on their march.  There was a lowering sky overhead, sloppy ground under foot, and a winter chill in the air.  All gaiety was gone from the company; some were sullen and silent, some were irritable and petulant, none were gentle-humoured, all were thirsty.

The Ruffler put 'Jack' in Hugo's charge, with some brief instructions, and commanded John Canty to keep away from him and let him alone; he also warned Hugo not to be too rough with the lad.

After a while the weather grew milder, and the clouds lifted somewhat. The troop ceased to shiver, and their spirits began to improve.  They grew more and more cheerful, and finally began to chaff each other and insult passengers along the highway.  This showed that they were awaking to an appreciation of life and its joys once more.  The dread in which their sort was held was apparent in the fact that everybody gave them the road, and took their ribald insolences meekly, without venturing to talk back. They snatched linen from the hedges, occasionally in full view of the owners, who made no protest, but only seemed grateful that they did not take the hedges, too.

By-and-by they invaded a small farmhouse and made themselves at home while the trembling farmer and his people swept the larder clean to furnish a breakfast for them.  They chucked the housewife and her daughters under the chin whilst receiving the food from their hands, and made coarse jests about them, accompanied with insulting epithets and bursts of horse-laughter.  They threw bones and vegetables at the farmer and his sons, kept them dodging all the time, and applauded uproariously when a good hit was made. They ended by buttering the head of one of the daughters who resented some of their familiarities.  When they took their leave they threatened to come back and burn the house over the heads of the family if any report of their doings got to the ears of the authorities.

About noon, after a long and weary tramp, the gang came to a halt behind a hedge on the outskirts of a considerable village.  An hour was allowed for rest, then the crew scattered themselves abroad to enter the village at different points to ply their various trades—'Jack' was sent with Hugo.  They wandered hither and thither for some time, Hugo watching for opportunities to do a stroke of business, but finding none—so he finally said—

"I see nought to steal; it is a paltry place.  Wherefore we will beg."

"Thou'lt not beg!" exclaimed Hugo, eyeing the King with surprise. "Prithee, since when hast thou reformed?"

"What dost thou mean?"

"Mean?  Hast thou not begged the streets of London all thy life?"

"Spare thy compliments—thy stock will last the longer.  Thy father says thou hast begged all thy days.  Mayhap he lied. Peradventure you will even make so bold as to SAY he lied," scoffed Hugo....