The Prince and the Pauper, Part 5. 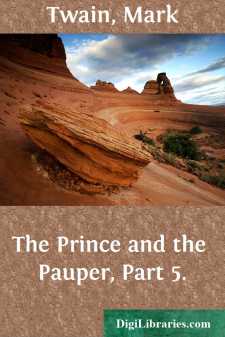 The next day the foreign ambassadors came, with their gorgeous trains; and Tom, throned in awful state, received them.  The splendours of the scene delighted his eye and fired his imagination at first, but the audience was long and dreary, and so were most of the addresses—wherefore, what began as a pleasure grew into weariness and home-sickness by-and-by.  Tom said the words which Hertford put into his mouth from time to time, and tried hard to acquit himself satisfactorily, but he was too new to such things, and too ill at ease to accomplish more than a tolerable success.  He looked sufficiently like a king, but he was ill able to feel like one.  He was cordially glad when the ceremony was ended.

The larger part of his day was 'wasted'—as he termed it, in his own mind—in labours pertaining to his royal office.  Even the two hours devoted to certain princely pastimes and recreations were rather a burden to him than otherwise, they were so fettered by restrictions and ceremonious observances.  However, he had a private hour with his whipping-boy which he counted clear gain, since he got both entertainment and needful information out of it.

The third day of Tom Canty's kingship came and went much as the others had done, but there was a lifting of his cloud in one way—he felt less uncomfortable than at first; he was getting a little used to his circumstances and surroundings; his chains still galled, but not all the time; he found that the presence and homage of the great afflicted and embarrassed him less and less sharply with every hour that drifted over his head.

But for one single dread, he could have seen the fourth day approach without serious distress—the dining in public; it was to begin that day. There were greater matters in the programme—for on that day he would have to preside at a council which would take his views and commands concerning the policy to be pursued toward various foreign nations scattered far and near over the great globe; on that day, too, Hertford would be formally chosen to the grand office of Lord Protector; other things of note were appointed for that fourth day, also; but to Tom they were all insignificant compared with the ordeal of dining all by himself with a multitude of curious eyes fastened upon him and a multitude of mouths whispering comments upon his performance,—and upon his mistakes, if he should be so unlucky as to make any.

Still, nothing could stop that fourth day, and so it came.  It found poor Tom low-spirited and absent-minded, and this mood continued; he could not shake it off.  The ordinary duties of the morning dragged upon his hands, and wearied him.  Once more he felt the sense of captivity heavy upon him.

Late in the forenoon he was in a large audience-chamber, conversing with the Earl of Hertford and dully awaiting the striking of the hour appointed for a visit of ceremony from a considerable number of great officials and courtiers.

After a little while, Tom, who had wandered to a window and become interested in the life and movement of the great highway beyond the palace gates—and not idly interested, but longing with all his heart to take part in person in its stir and freedom—saw the van of a hooting and shouting mob of disorderly men, women, and children of the lowest and poorest degree approaching from up the road....