The Prince and the Pauper, Part 3. 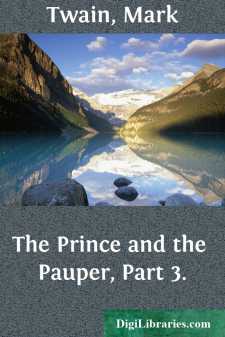 Chapter VIII. The question of the Seal.

About five o'clock Henry VIII. awoke out of an unrefreshing nap, and muttered to himself, "Troublous dreams, troublous dreams! Mine end is now at hand:  so say these warnings, and my failing pulses do confirm it." Presently a wicked light flamed up in his eye, and he muttered, "Yet will not I die till HE go before."

His attendants perceiving that he was awake, one of them asked his pleasure concerning the Lord Chancellor, who was waiting without.

"Admit him, admit him!" exclaimed the King eagerly.

The Lord Chancellor entered, and knelt by the King's couch, saying—

"I have given order, and, according to the King's command, the peers of the realm, in their robes, do now stand at the bar of the House, where, having confirmed the Duke of Norfolk's doom, they humbly wait his majesty's further pleasure in the matter."

The King's face lit up with a fierce joy.  Said he—

"Lift me up!  In mine own person will I go before my Parliament, and with mine own hand will I seal the warrant that rids me of—"

His voice failed; an ashen pallor swept the flush from his cheeks; and the attendants eased him back upon his pillows, and hurriedly assisted him with restoratives.  Presently he said sorrowfully—

"Alack, how have I longed for this sweet hour! and lo, too late it cometh, and I am robbed of this so coveted chance.  But speed ye, speed ye! let others do this happy office sith 'tis denied to me. I put my Great Seal in commission:  choose thou the lords that shall compose it, and get ye to your work.  Speed ye, man!  Before the sun shall rise and set again, bring me his head that I may see it."

"According to the King's command, so shall it be.  Will't please your majesty to order that the Seal be now restored to me, so that I may forth upon the business?"

"The Seal?  Who keepeth the Seal but thou?"

"Please your majesty, you did take it from me two days since, saying it should no more do its office till your own royal hand should use it upon the Duke of Norfolk's warrant."

The King dropped into inarticulate mumblings, shaking his grey head weakly from time to time, and gropingly trying to recollect what he had done with the Seal.  At last my Lord Hertford ventured to kneel and offer information—

"Sire, if that I may be so bold, here be several that do remember with me how that you gave the Great Seal into the hands of his highness the Prince of Wales to keep against the day that—"

Lord Hertford flew to Tom, but returned to the King before very long, troubled and empty-handed.  He delivered himself to this effect—

"It grieveth me, my lord the King, to bear so heavy and unwelcome tidings; but it is the will of God that the prince's affliction abideth still, and he cannot recall to mind that he received the Seal....