The Prince and the Pauper, Part 2. 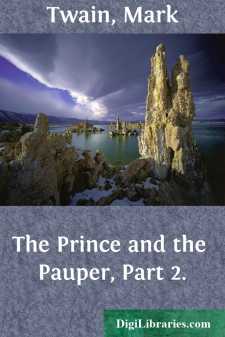 Chapter V. Tom as a patrician.

Tom Canty, left alone in the prince's cabinet, made good use of his opportunity.  He turned himself this way and that before the great mirror, admiring his finery; then walked away, imitating the prince's high-bred carriage, and still observing results in the glass.  Next he drew the beautiful sword, and bowed, kissing the blade, and laying it across his breast, as he had seen a noble knight do, by way of salute to the lieutenant of the Tower, five or six weeks before, when delivering the great lords of Norfolk and Surrey into his hands for captivity.  Tom played with the jewelled dagger that hung upon his thigh; he examined the costly and exquisite ornaments of the room; he tried each of the sumptuous chairs, and thought how proud he would be if the Offal Court herd could only peep in and see him in his grandeur.  He wondered if they would believe the marvellous tale he should tell when he got home, or if they would shake their heads, and say his overtaxed imagination had at last upset his reason.

At the end of half an hour it suddenly occurred to him that the prince was gone a long time; then right away he began to feel lonely; very soon he fell to listening and longing, and ceased to toy with the pretty things about him; he grew uneasy, then restless, then distressed. Suppose some one should come, and catch him in the prince's clothes, and the prince not there to explain.  Might they not hang him at once, and inquire into his case afterward?  He had heard that the great were prompt about small matters.  His fear rose higher and higher; and trembling he softly opened the door to the antechamber, resolved to fly and seek the prince, and, through him, protection and release.  Six gorgeous gentlemen-servants and two young pages of high degree, clothed like butterflies, sprang to their feet and bowed low before him.  He stepped quickly back and shut the door.  He said—

He walked up and down the floor, filled with nameless fears, listening, starting at every trifling sound.  Presently the door swung open, and a silken page said—

The door closed and a sweet young girl, richly clad, bounded toward him. But she stopped suddenly, and said in a distressed voice—

Tom's breath was nearly failing him; but he made shift to stammer out—

"Ah, be merciful, thou!  In sooth I am no lord, but only poor Tom Canty of Offal Court in the city.  Prithee let me see the prince, and he will of his grace restore to me my rags, and let me hence unhurt.  Oh, be thou merciful, and save me!"

By this time the boy was on his knees, and supplicating with his eyes and uplifted hands as well as with his tongue.  The young girl seemed horror-stricken.  She cried out—

Then she fled away in fright; and Tom, smitten with despair, sank down, murmuring—