The Prince and the Pauper, Part 1. 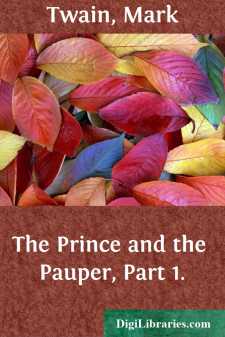 Chapter I. The birth of the Prince and the Pauper.

In the ancient city of London, on a certain autumn day in the second quarter of the sixteenth century, a boy was born to a poor family of the name of Canty, who did not want him.  On the same day another English child was born to a rich family of the name of Tudor, who did want him. All England wanted him too.  England had so longed for him, and hoped for him, and prayed God for him, that, now that he was really come, the people went nearly mad for joy.  Mere acquaintances hugged and kissed each other and cried. Everybody took a holiday, and high and low, rich and poor, feasted and danced and sang, and got very mellow; and they kept this up for days and nights together.  By day, London was a sight to see, with gay banners waving from every balcony and housetop, and splendid pageants marching along.  By night, it was again a sight to see, with its great bonfires at every corner, and its troops of revellers making merry around them.  There was no talk in all England but of the new baby, Edward Tudor, Prince of Wales, who lay lapped in silks and satins, unconscious of all this fuss, and not knowing that great lords and ladies were tending him and watching over him—and not caring, either.  But there was no talk about the other baby, Tom Canty, lapped in his poor rags, except among the family of paupers whom he had just come to trouble with his presence.

Let us skip a number of years.

London was fifteen hundred years old, and was a great town—for that day. It had a hundred thousand inhabitants—some think double as many.  The streets were very narrow, and crooked, and dirty, especially in the part where Tom Canty lived, which was not far from London Bridge.  The houses were of wood, with the second story projecting over the first, and the third sticking its elbows out beyond the second.  The higher the houses grew, the broader they grew.  They were skeletons of strong criss-cross beams, with solid material between, coated with plaster.  The beams were painted red or blue or black, according to the owner's taste, and this gave the houses a very picturesque look.  The windows were small, glazed with little diamond-shaped panes, and they opened outward, on hinges, like doors.

The house which Tom's father lived in was up a foul little pocket called Offal Court, out of Pudding Lane.  It was small, decayed, and rickety, but it was packed full of wretchedly poor families. Canty's tribe occupied a room on the third floor.  The mother and father had a sort of bedstead in the corner; but Tom, his grandmother, and his two sisters, Bet and Nan, were not restricted—they had all the floor to themselves, and might sleep where they chose.  There were the remains of a blanket or two, and some bundles of ancient and dirty straw, but these could not rightly be called beds, for they were not organised; they were kicked into a general pile, mornings, and selections made from the mass at night, for service.