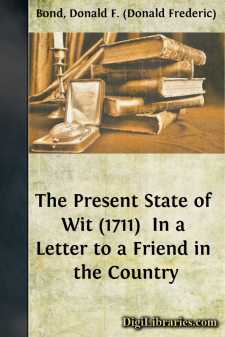 Gay's concern in his survey of The Present State of Wit is with the productions of wit which were circulating among the coffee-houses of 1711, specifically the large numbers of periodical essays which were perhaps the most distinctive kind of "wit" produced in the "four last years" of Queen Anne's reign. His little pamphlet makes no pretence at an analysis of true and false wit or a refining of critical distinctions with regard to wit in its relations to fancy and judgment. Addressed to "a friend in the country," it surveys in a rapid and engaging manner the productions of Isaac Bickerstaff and his followers which are engrossing the interest of London. In other words it is an early example of a popular eighteenth-century form, of which Goldsmith's more extended Inquiry into the Present State of Polite Learning is the best known instance.

As such it well deserves a place in the Augustan Reprints series on wit. It has been reproduced before in this century, in An English Garner: Critical Essays and Literary Fragments (Westminster, 1903, pp. 201-10), with an attractive and informative introduction by J. Churton Collins. More information, however, is now at our disposal in the forty year interval since Collins wrote, both in regard to John Gay and to the bibliography of periodical literature in Queen Anne's time. Furthermore, the Arber reprint is difficult to obtain.

Gay is writing, he tells us, without prejudice "either for Whig or Tory," but the warm praise which he extends to Steele and Addison makes his pamphlet sound like the criticism of one very close to the Whigs. Though Gay is ordinarily associated with the Tory circle of Swift and Pope, he was in 1711 still in the somewhat uncertain position of a youngster willing to be courted by either group. His earliest sympathies were if anything on the side of the Whigs, in spite of the turn of events in the autumn of 1710. Gay's interests in these early years are nowhere so well analyzed as in the early pages of W.H. Irving's John Gay: Favorite of the Wits (Durham, N.C., 1940): cf. the title of the second chapter: "Direction Found—the Year 1713." Even as late as 1715 Swift apparently thought of him as a Whig (Swift's Letters, ed. Ball, II, 286, cited by Irving, p. 91).

One need not be surprised, then, to find Gay eulogizing Captain Steele as "the greatest scholar and best casuist of any man in England," an essayist whose writings "have set all our wits and men of letters on a new way of thinking." Swift's reaction is well known. "Dr. Freind was with me," he writes to Stella on May 14th, "and pulled out a two-penny pamphlet just published, called, The State of Wit, giving a character of all the papers that have come out of late. The author seems to be a Whig, yet he speaks very highly of a paper called the Examiner, and says the supposed author of it is Dr. Swift. But above all things he praises the Tatlers and Spectators; and I believe Steele and Addison were privy to the printing of it. Thus is one treated by these impudent dogs" (Journal to Stella, ed....