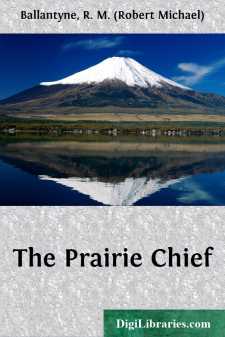 Whitewing was a Red Indian of the North American prairies. Though not a chief of the highest standing, he was a very great man in the estimation of his tribe, for, besides being possessed of qualities which are highly esteemed among all savages—such as courage, strength, agility, and the like—he was a deep thinker, and held speculative views in regard to the Great Manitou (God), as well as the ordinary affairs of life, which perplexed even the oldest men of his tribe, and induced the younger men to look on him as a profound mystery.

Indeed the feelings of the latter towards Whitewing amounted almost to veneration, for while, on the one hand, he was noted as one of the most fearless among the braves, and a daring assailant of that king of the northern wilderness, the grizzly bear, he was, on the other hand, modest and retiring—never boasted of his prowess, disbelieved in the principle of revenge, which to most savages is not only a pleasure but a duty, and refused to decorate his sleeves or leggings with the scalp-locks of his enemies. Indeed he had been known to allow more than one enemy to escape from his hand in time of war when he might easily have killed him. Altogether, Whitewing was a monstrous puzzle to his fellows, and much beloved by many of them.

The only ornament which he allowed himself was the white wing of a ptarmigan. Hence his name. This symbol of purity was bound to his forehead by a band of red cloth wrought with the quills of the porcupine. It had been made for him by a dark-eyed girl whose name was an Indian word signifying “light heart.” But let it not be supposed that Lightheart’s head was like her heart. On the contrary, she had a good sound brain, and, although much given to laughter, jest, and raillery among her female friends, would listen with unflagging patience, and profound solemnity, to her lover’s soliloquies in reference to things past, present, and to come.

One of the peculiarities of Whitewing was that he did not treat women as mere slaves or inferior creatures. His own mother, a wrinkled, brown old thing resembling a piece of singed shoe-leather, he loved with a tenderness not usual in North American Indians, some tribes of whom have a tendency to forsake their aged ones, and leave them to perish rather than be burdened with them. Whitewing also thought that his betrothed was fit to hold intellectual converse with him, in which idea he was not far wrong.

At the time we introduce him to the reader he was on a visit to the Indian camp of Lightheart’s tribe in Clearvale, for the purpose of claiming his bride. His own tribe, of which the celebrated old warrior Bald Eagle was chief, dwelt in a valley at a considerable distance from the camp referred to.

There were two other visitors at the Indian camp at that time. One was a Wesleyan missionary who had penetrated to that remote region with a longing desire to carry the glad tidings of salvation in Jesus to the red men of the prairie. The other was a nondescript little white trapper, who may be aptly described as a mass of contradictions....