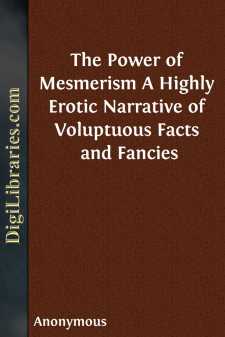 Brackley Hall was a fine old place in the lovely country of Devon and had been in the possession of the Etheridges for centuries.

The park was beautifully wooded, and stretched down on one side to the coast, commanding in all directions the most enchanting views.

Mr. Etheridge was a man of some forty years of age, of singularly handsome appearance, and bore evident traces of the Italian blood which flowed in his veins. He had the appearance of a man having strong amorous passions, but his manners were as gentle as those of a woman, and he was universally popular throughout the whole county.

His wife was a woman of unusual beauty. Descended from an old Spanish family, she had married when but sixteen years of age; Mr. Etheridge having met her at the house of some friends, and as they mutually fell in love with each other, their united entreaties overcame the objection raised on account of her youth, and in fact the warm blood that flowed in her veins had ripened her beauty to an extent almost unusual in those of more phlegmatic races.

She was now in her thirty-fifth year, and in the full zenith of her charms. An exquisitely shaped head graced a neck and shoulders white as alabaster, large liquid eyes, and long drooping lashes, a nose of perfect form, and two ruby pouting lips that seemed made to be kissed.

Her form was magnificent, of commanding height, widely spreading hips, and a bosom of massive proportions, the firmness of which rendered stays entirely unnecessary; a fact that was evident on watching the rise and fall of those two lovely globes, their form being perfectly defined even to the nipples, beneath her well-fitting dress.

Her glance was electric, and it was impossible to meet her look unmoved, she exhaled an atmosphere of voluptuousness of the most maddening force.

Her daughter Ethel, who had left school in Paris but a few months, was the very counterpart of her lovely mother in her leading features. She had just completed her seventeenth year, and was of tall, graceful stature, with a perfect figure. The smallness of her waist contrasted perfectly with the ravishing fullness of bosom and wideness of hips. She had the liquid eyes of her mother, but they were suffused with a humidity that was perfectly maddening, and the expression of every feature of her lovely face and palpitating form spoke of a warmth of temperament and lascivious abandon that would have tempted an anchorite.

On a bright summer afternoon, in the year 18—, father, mother, and daughter were waiting at the railway station, anxiously expecting the arrival of the remaining member of the family, Frank, who, a year older than Ethel, had been finishing his education in Germany, and was now returning to take up his residence at Brackley.

At last the train arrived, and they hardly recognised the handsome, tall, and fine-looking young fellow who leaped out to greet them.

A few hours after reaching the house the parents noted a peculiar change that had taken place in their son. A dreamy languor seemed to have taken possession of him, in place of the exuberant flow of animal spirits that characterised him as a boy....