The Pot of Gold And Other Stories 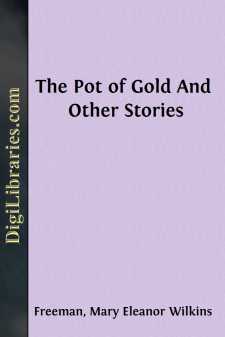 THE POT OF GOLD.

The Flower family lived in a little house in a broad grassy meadow, which sloped a few rods from their front door down to a gentle, silvery river. Right across the river rose a lovely dark green mountain, and when there was a rainbow, as there frequently was, nothing could have looked more enchanting than it did rising from the opposite bank of the stream with the wet, shadowy mountain for a background. All the Flower family would invariably run to their front windows and their door to see it.

The Flower family numbered nine: Father and Mother Flower and seven children. Father Flower was an unappreciated poet, Mother Flower was very much like all mothers, and the seven children were very sweet and interesting. Their first names all matched beautifully with their last name, and with their personal appearance. For instance, the oldest girl, who had soft blue eyes and flaxen curls, was called Flax Flower; the little boy, who came next, and had[Page 12] very red cheeks and loved to sleep late in the morning, was called Poppy Flower, and so on. This charming suitableness of their names was owing to Father Flower. He had a theory that a great deal of the misery and discord in the world comes from things not matching properly as they should; and he thought there ought to be a certain correspondence between all things that were in juxtaposition to each other, just as there ought to be between the last two words of a couplet of poetry. But he found, very often, there was no correspondence at all, just as words in poetry do not always rhyme when they should. However, he did his best to remedy it. He saw that every one of his children's names were suitable and accorded with their personal characteristics; and in his flower-garden—for he raised flowers for the market—only those of complementary colors were allowed to grow in adjoining beds, and, as often as possible, they rhymed in their names. But that was a more difficult matter to manage, and very few flowers were rhymed, or, if they were, none rhymed correctly. He had a bed of box next to one of phlox, and a trellis of woodbine grew next to one of eglantine, and a thicket of elder-blows was next to one of rose; but he was forced to let his violets and honeysuckles and many others go entirely unrhymed—this disturbed him considerably, but he reflected that it was not his fault, but that of the man who made the language and named the different[Page 13] flowers—he should have looked to it that those of complementary colors had names to rhyme with each other, then all would have been harmonious and as it should have been.

Father Flower had chosen this way of earning his livelihood when he realized that he was doomed to be an unappreciated poet, because it suited so well with his name; and if the flowers had only rhymed a little better he would have been very well contented. As it was, he never grumbled. He also saw to it that the furniture in his little house and the cooking utensils rhymed as nearly as possible, though that too was oftentimes a difficult matter to bring about, and required a vast deal of thought and hard study....