The Possessed (The Devils) 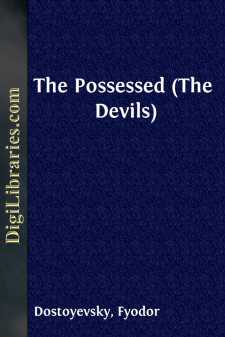 SOME DETAILS OF THE BIOGRAPHY OF THAT HIGHLY RESPECTED GENTLEMAN STEPAN TROFIMOVITCH VERHOVENSKY.

IN UNDERTAKING to describe the recent and strange incidents in our town, till lately wrapped in uneventful obscurity, I find myself forced in absence of literary skill to begin my story rather far back, that is to say, with certain biographical details concerning that talented and highly-esteemed gentleman, Stepan Trofimovitch Verhovensky. I trust that these details may at least serve as an introduction, while my projected story itself will come later.

I will say at once that Stepan Trofimovitch had always filled a particular role among us, that of the progressive patriot, so to say, and he was passionately fond of playing the part—so much so that I really believe he could not have existed without it. Not that I would put him on a level with an actor at a theatre, God forbid, for I really have a respect for him. This may all have been the effect of habit, or rather, more exactly of a generous propensity he had from his earliest years for indulging in an agreeable day-dream in which he figured as a picturesque public character. He fondly loved, for instance, his position as a "persecuted" man and, so to speak, an "exile." There is a sort of traditional glamour about those two little words that fascinated him once for all and, exalting him gradually in his own opinion, raised him in the course of years to a lofty pedestal very gratifying to vanity. In an English satire of the last century, Gulliver, returning from the land of the Lilliputians where the people were only three or four inches high, had grown so accustomed to consider himself a giant among them, that as he walked along the streets of London he could not help crying out to carriages and passers-by to be careful and get out of his way for fear he should crush them, imagining that they were little and he was still a giant. He was laughed at and abused for it, and rough coachmen even lashed at the giant with their whips. But was that just? What may not be done by habit? Habit had brought Stepan Trofimovitch almost to the same position, but in a more innocent and inoffensive form, if one may use such expressions, for he was a most excellent man.

I am even inclined to suppose that towards the end he had been entirely forgotten everywhere; but still it cannot be said that his name had never been known. It is beyond question that he had at one time belonged to a certain distinguished constellation of celebrated leaders of the last generation, and at one time—though only for the briefest moment—his name was pronounced by many hasty persons of that day almost as though it were on a level with the names of Tchaadaev, of Byelinsky, of Granovsky, and of Herzen, who had only just begun to write abroad. But Stepan Trofimovitch's activity ceased almost at the moment it began, owing, so to say, to a "vortex of combined circumstances." And would you believe it? It turned out afterwards that there had been no "vortex" and even no "circumstances," at least in that connection....