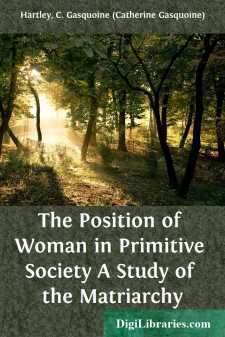 The twentieth century is the age of Woman; some day, it may be that it will be looked back upon as the golden age, the dawn, some say, of feminine civilisation. We cannot estimate as yet; and no man can tell what forces these new conditions may not release in the soul of woman. The modern change is that the will of woman is asserting itself. Women are looking for a satisfactory life, which is to be determined from within themselves, not from without by others. The result is a discontent that may well prove to be the seed or spring of further changes in a society which has yet to find its normal organisation. Yes, women are finding themselves, and men are discovering what women mean.

In the present time we are passing through a difficult period of transition. There are conditions of change that have to be met, the outcome of which it is very difficult to appreciate. A transformation in the thought and conduct of women, for which the term “revolution” is not too strong, is taking place around us; doubtless many experimental phases will be tried before we reach a new position of equilibrium.

This must be. There can be no life without movement.

The expression, “a transition period,” is, of course, only relative. We often say: This or that is a sign of the present era; and, nine times out of ten, the thing we believe to be new is in reality as old as the world itself. In one sense the whole of history is a vast transition. No period stands alone; the present is in every age merely the shifting point at which the past and the future meet. All things move onwards. But the movement sometimes takes the form of a cataract, at others of an even and almost imperceptible current. This is really another way of saying that the usually slow and gradual course of change is, at certain stages, interrupted by a more or less prolonged period of revolution. The process of growth, from being gradual and imperceptible, becomes violent and conscious.

There can be little doubt that what is called the “Woman’s Movement,” with its disintegrating influences on social opinion and practice, is bringing vast and momentous changes in women’s attitude towards the universe and towards themselves. A great motive and an enlarging ideal, a quickening of the woman’s spirit, a stirring dream of a new order—these are what we have gained. We are carried on, though as yet we know not whither, and there is, of necessity, a little stumbling of our feet as we seek for a way. Hence the fear, always tending to arise in periods of social reconstruction, which is felt by many to-day as women pass out far beyond the established boundaries prescribed for their sex.

Whoever reflects soberly on the past history of women will not be surprised at their present movement towards emancipation. Women are reclaiming a position that is theirs by natural right—a position which once they held. It may be all very well for those who accept the authority and headship of the man as the foundation of the family and of society, to be filled with bewildered fear at what seems to them to be a quite new assertion of rights on the part of the mothers of the race....