The Portion of Labor 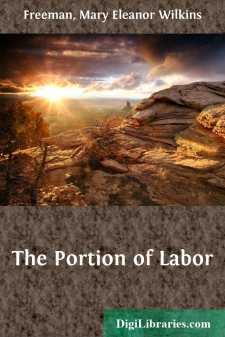 On the west side of Ellen's father's house was a file of Norway spruce-trees, standing with a sharp pointing of dark boughs towards the north, which gave them an air of expectancy of progress.

Every morning Ellen, whose bedroom faced that way, looked out with a firm belief that she would see them on the other side of the stone wall, advanced several paces towards their native land. She had no doubt of their ability to do so; their roots, projecting in fibrous sprawls from their trunks, were their feet, and she pictured them advancing with wide trailings, and rustlings as of green draperies, and a loudening of that dreamy cry of theirs which was to her imagination a cry of homesickness reminiscent of their old life in the White north. When Ellen had first heard the name Norway spruce, 'way back in her childhood—so far back, though she was only seven and a half now, that it seemed to her like a memory from another life—she had asked her mother to show her Norway on the map, and her strange convictions concerning the trees had seized her. When her mother said that they had come from that northernmost land of Europe, Ellen, to whose childhood all truth was naked and literal, immediately conceived to herself those veritable trees advancing over the frozen seas around the pole, and down through the vast regions which were painted blue on her map, straight to her father's west yard. There they stood and sang the songs of their own country, with a melancholy sweetness of absence and longing, and were forever thinking to return. Ellen felt always a thrill of happy surprise when she saw them still there of a morning, for she felt that she would miss them sorely when they were gone. She said nothing of all this to her mother; it was one of the secrets of the soul which created her individuality and made her a spiritual birth. She was also silent about her belief concerning the cherry-trees in the east yard. There were three of them, giants of their kind, which filled the east yard every spring as with mountains of white bloom, breathing wide gusts of honey sweetness, and humming with bees. Ellen believed that these trees had once stood in the Garden of Eden, but she never expected to find them missing from the east yard of a morning, for she remembered the angel with the flaming sword, and she knew how one branch of the easternmost tree happened to be blasted as if by fire. And she thought that these trees were happy, and never sighed to the wind as the dark evergreens did, because they had still the same blossoms and the same fruit that they had in Eden, and so did not fairly know that they were not there still. Sometimes Ellen, sitting underneath them on a low rib of rock on a May morning, used to fancy with success that she and the trees were together in that first garden which she had read about in the Bible.

Sometimes, after one of these successful imaginings, when Ellen's mother called her into the house she would stare at her little daughter uneasily, and give her a spoonful of a bitter spring medicine which she had brewed herself....