The Poetry of Wales 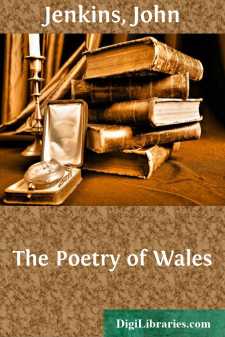 Add to My Favorites
Published: 11 years ago
Downloads: 51
Rating: (1 Vote)

The literature of a people always reflects their character.  You may discover in the prose and poetry of a nation its social condition, and in their different phases its political progress.  The age of Homer was the heroic, in which the Greeks excelled in martial exploits; that of Virgil found the Romans an intellectual and gallant race; the genius of Chaucer, Spencer and Sidney revelled in the feudal halls and enchanted vistas of the middle ages; Shakespeare delineated the British mind in its grave and comic moods; Milton reflected the sober aspect and spiritual aspirations of the Puritanical era; while at later periods Pope, Goldsmith and Cowper pourtrayed the softer features of an advanced civilization and milder times.

Following the same rule, the history of Wales is its literature.  First came the odes and triads, in which the bards recited the valour, conquests and hospitality of their chieftains, and the gentleness, beauty and virtue of their brides.  This was the age of Aneurin, of Taliesin and Llywarch Hen.  Next came the period of love and romance, wherein were celebrated the refined courtship and gay bridals of gallant knights and lovely maids.  This was the age of Dafydd ap Gwilym, of Hywel ap Einion and Rhys Goch.  In later times appeared the moral songs and religious hymns of the Welsh Puritans, wherein was conspicuous above all others William Williams of Pantycelyn, aptly denominated “The Sweet Psalmist of Wales.”

The Principality, like every other country, has had and has its orators, its philosophers and historians; and, much as they are prized by its native race, we venture to predict that the productions of none will outlive the language in which their prose is spoken and writ.  Not that there is wanting either eloquence or grandeur or force in their orations and essays, depth or originality in their philosophical theories, or truthfulness, research or learning in their historic lore; but that neither the graces of the first, the novelty of the next, or the fidelity of the last will in our opinion justify a translation into more widely spoken tongues, and be read with profit and interest by a people whose libraries are filled with all that is most charming in literature, most profound in philosophy and most new and advanced in science and art.

Our evil prophecy of its prose does not however extend to the poetry of Wales, for like all other branches of the Celtic race, the ancient Britons have cultivated national song and music with a love, skill and devotion which have produced poems and airs well deserving of extensive circulation, long life and lasting fame.  The poetic fire has inspired the nation from the most primitive times, for we find that an order of the Druidical priests were bards who composed their metres among aboriginal temples and spreading groves of oak.  The bard was an important member of the royal household, for the court was not complete without the Bard President, the Chief of Song, and the Domestic Bard.  The laws of Hywel the Good, King or Prince of Wales in the tenth century, enact:—

“If there should be fighting, the bard shall sing ‘The Monarchy of Britain’ in front of the battle.”

“The Bard President shall sit at the Royal Table.”

“His land shall be free, and he shall have a horse in attendance from the king.”

“The Chief of Song shall begin the singing in the common hall.”

“He shall be next but one to the patron of the family.”

“He shall have a harp from the king, and a gold ring from the queen when his office is secured to him.  The harp he shall never part with.”

“When a song is called for, the Bard President should begin; the first song shall be addressed to God, the next to the king.  The Domestic Bard shall sing to the queen and royal household.”

The bard therefore in ancient times performed important functions.  In peace he delighted his lord with songs of chivalry, love and friendship.  In war he accompanied his prince to battle, and recited the might and prowess of his leader and the martial virtue of his hosts.  No court or hall was complete without the presence of the bard, who enlivened the feast with his minstrelsy and song.  We also see that the Welsh bard, like the primitive poets of Greece, and the troubadours of southern France, sang his verses to the harp, whose dulcet strings have always sent forth the national melodies.  The chief bards were attached to the courts and castles of their princes and chieftains; but a multitude of inferior minstrels wandered the country singing to their harps, and were in those primitive times received with open arms and welcome hospitality in the houses of the gentry, and whither soever they went.  Even within living memory the English tourist has often met in the lonely dells and among the mountain passes of Wales the wayworn minstrel, with harp strung to his shoulders, ever ready to delight the traveller with the bewitching notes of his lyre and song.  But the modern bard of Wales is the counterpart of his Scottish brother, of whom Scott wrote:—

“The way was long, the wind was cold,The minstrel was infirm and old;His withered cheeks and tresses graySeemed to have known a better day;The harp, his sole remaining joy,Was carried by an orphan boy....